RULES FOR RECRUITING IN A PARKING LOT

Share All sharing options for: RULES FOR RECRUITING IN A PARKING LOT

If coaches are going to recruit in the parking lot of Penn State University, they may as well observe some rules of parking lot recruiting decorum.

He's just trying to be helpful, and it is his summer job, but don't let Tino Sunseri park your car. 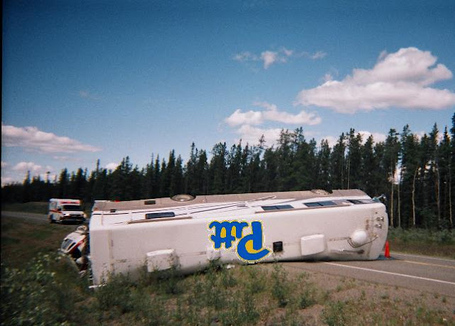 Don't leave Greg Davis in the car with the windows rolled up! That is not an okay way to get rid of a bad hire.

Approach a recruit from the sides, never head on. If their ears are pinned to the sides of their head, back away slowly and do NOT make eye contact.

Do not offer a scholarship to a linebacker claiming to have "that disease Robin Williams had in that one movie. No, not The Birdcage." This is Dennis Erickson, and he cannot tackle in space for shit.

Ron Zook may offer you a scholarship. Warning: Ron Zook is currently only head coach at "Ronnie Z's Aquaballs Academy." It is not accredited, and does not have a football team.

Shooting a canister full of tear gas in your team colors through a player's apartment window: not a recruiting violation, probably!

Gymkhana is easy, and can be done by a beginner in a rental car with no instruction whatsoever! Do it in the parking lot to impress a recruit or two and watch the commits roll in!

Please note: 12:15-12:30 on Thursday afternoon is listed as "CLOBBERING TIME," wherein USC is entitled to any recruit Ed Orgeron can knock out with one punch.

A Rodney Garner may attach itself to a recruit's face. It may be removed from the face with rubbing alcohol and a pair of tweezers, but go sloooooowly.

Trooper Taylor won't sleep with your mother to get a recruit hey wait let's get a picture of that mother first of all NOPE. NO HE WILL NOT.

If Mark Emmert shows up and asks, we're all here for Vacation Bible School.

Please be sure to clean up all trash when you leave to help prevent the spread of possums, raccoons, and Big East members.

If John L. Smith pulls up in a silk jacket with a dragon on the back in a muscle car and nods, do NOT get in that car.

Tip for Miami: Tell Mike Locksley it's Opposite Day.