Bray, in limited work from a camp chair on a balcony, completed 7 of 9 attempts overall and showed no rust from the long layoff. In work against stationary targets, Bray showed great accuracy and impressive velocity, especially on deep balls thrown to a tree, dumpster, and what may have been a deer lingering on the edge of the apartment parking lot. 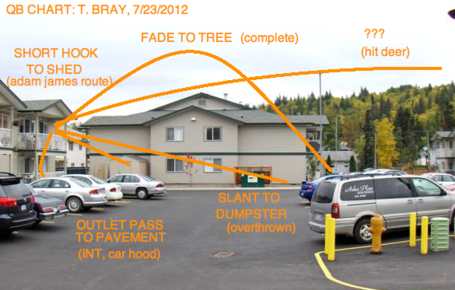 Bray did not comment on his performance, and instead headed inside without speaking with reporters after he was finished. The Tennessee coaching staff had no comment on the unorthodox drills, but football experts did admit the use of inanimate objects and beer bottles as throwing objects was not unique.

"Hell, it was all I threw for the most part at Alabama, since we were only throwing like eleven times a game or something," said an unidentified former SEC quarterback. "My name is Kenny Stabler," said the quarterback, who spoke on the condition of anonymity. "That's K-E-N-N-Y S-T shit it's too early for this."

No charges were filed as a result of the practice drill.