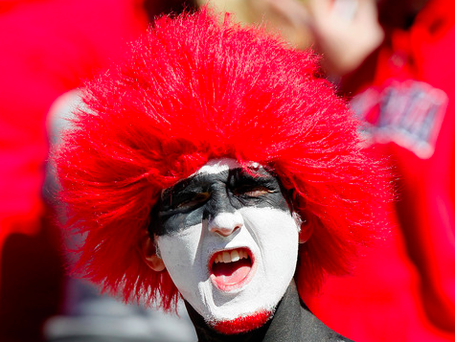 I, Dawgstradamus, bring visions of a future Mark Richt has yet to lose control of yet.

Last night my friends Chad, Tanner, and Channer attended a viewing of the new motion picture film The Dark Knight Rises. I awaited this with great anticipation, as I had enjoyed the first two installments greatly. We entered the theater after consuming a fair number of pitchers of ale* at a local watering hole, and then spaced out appropriately in the theater. We are not homosexuals, and leave a seat between each of us to make this apparent to anyone watching.

The film's exposition was a bit clunky. It reminded me very much of Mike Bobo's playcalling against Boise State in our opener last year: entirely without rhythm, ineffective, and generally disorganized. Unlike that infamous debacle, however, the film picked up speed appreciably, and I found myself taken by the general spectacle of Mr. Nolan's presentation.

It should go without saying that as a Southern Gentleman, I value decorum above almost every other value.* However, I must confess that the film only really took flight for me (pardon the atrocious pteropine punnery) when this glorious Afro-Asian vision appeared on the screen.

*Those other values are faith, loyalty, guttiness, ham, The History Channel, and nothing in the butt, ever. These values, as you well know, are printed on every diploma issued by the University of Georgia. We live them. We believe them. 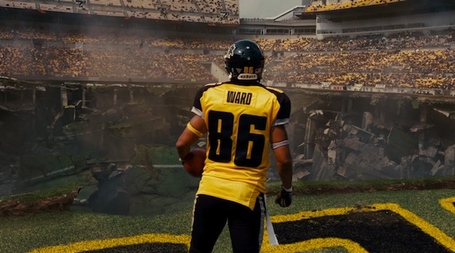 O, how this sight stirred me! I exclaimed "GO DAWGS, SIC 'EM" out loud in the theater, joined in unplanned unison by my fellow canines Chad and Tanner. Channer, however, was asleep. His job involves playing 18, sometimes as many as 36 holes of golf at a time, and the sun does tax a man like nothing else.

Yet as the jubilation of this moment passed, I fell into the fearsome reverie of my gift. As DAWGSTRADAMUS, these visions appear to me without warning. I cannot fight them.

At first I believed that yes, Hines Ward had survived Bane's attack due to his superior conference speed, but then alas! I recalled that at the bottom of that sad well were not just the slow bodies of sad prisoners of the Big Ten, but also other SEC players. Mike Wallace of Ole Miss is down there somewhere, and you may draw the logical connections between crushing disasters and the dismal annals of Mississippi football at your leisure. Maurkice Pouncey of the Florida Gators is also down there, and is most likely the source of all that smoke.

Clearly the omens were speaking to Dawgstradamus. Ward survives, only to find his city decimated by savage occupiers intent on destroying everything. The only way to overcome the defeat? To go through great pain and trial, and arrive at rock bottom. Then, after great difficulty, the Dawg Knight survives and faces the forces of tyranny.

(A clarification: a bat basically a flying fox, and a fox is just an effete, agoraphobic wolf, and a wolf is just a dog with a degree from the University of Florida before it wises up and sends his spawn to the University of Georgia. Dawgstradamus asks you to just go with this, because he has seen it and none of it mentioned your niggling technicalities. He has a degree in Civil War History, not flying dog taxonomies.)

And who, in the waning moments of the film, saves the world by restoring proper order, even at great cost to himeself and those who love him? Correct: the flyingdogman, known to the world as Batman. He will triumph in the air as he does in the film, something leading me to believe that Aaron Murray will throw for 500 yards in the SEC Championship Game against Alabama.

Then, to the national title game, and Mark Richt's retirement will complete the heroic cycle.

THUS WILL THE DAWG KNIGHT RISE.* DAWGSTRADAMUS HAS SPOKEN AND SEEN THE NEXT HERSCHEL IT IS RICHARD SAMUEL AND NO LAUGHING AT DAWGSTRADAMUS IS NOT PERMITTED. His pants are tight from eating an entire bucket of popcorn while engaging in prophecy, and he is feeling more than a touch self-conscious about it.

*Dawgstradamus will cite the role of Bobby Bowden as Ras-Al-Ghoul here in the narrative arc. He finds this comparison more than fitting in the general course of history. GO DAWGS