Share All sharing options for: MACK BROWN ENTERS THE ROOM WITH SUPPORT STAFF 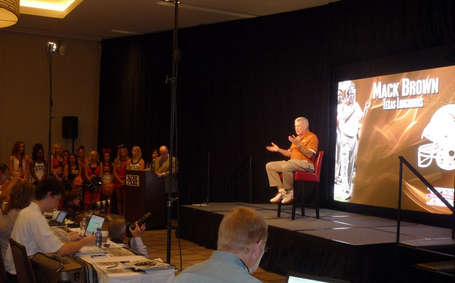 HELLO EVERYBODY I'm Mack Brown, the head coach for the University of Texas, the greatest university in the greatest state in the Union, the GREAT STATE OF TEXAS. I get $397 dollars every time I say that. The gesture I'm making right now, if you're not clear, is me juggling my enormous, wealthy invisible balls. Thank you all for having me here.

I'd like to thank the ten hardworking cheerleaders of the Big 12 for joining me here today. I promise they're not just for cosmetics, or aesthetics, or just to parade rich young flesh in front of your poor eyes gloating about all the money we have. Well, maybe that young lady from the Great University of the Great State of Texas is. Don't get too cozy, boys! She's packing a snubnosed .38 in her garter belt, and a handsy hobo currently occupying a cool slab in the Travis County morgue would tell you she's not afraid to use it if he could, but he can't because he's deader than Dennis Franchione's career.

But sweet Darrell Royal's buttcrack, do we have a lot of money. The inserts in my shoes are just thousands of euro bonds sewn together into rectangles! My manor's staff washed them by accident last week. I laughed! It's so utterly fantastic being this much richer than every single person in this room.

I want you to know these ladies bring a lot. The spirit of the Big 12. The hardwork we embody. Stomachs flat enough to nauseate Botticelli. They show the diversity and strength of this conference. Y'all think we just knock 'em up and set 'em down at Texas, but we're just one great cog in this machine. It's not like Texas owns the Big 12, lemme assure you of that.

It's not like we could just have our own network. It's not like I could just order them to follow me around, and it's certainly not like I could just get up here and order them to fight to the death for my pleasure. And if I could, why would I do that in front of you schleppin' type-monkeys? I'd probably do that on my ranch sometime, sippin' on some 400 year old brandy with my buddies Bun B, the Sultan of Brunei, and Jeff Bezos. That time would probably be at 9:15 or so tonight, and none of you are invited because you are poor, and I am not.

There's guns on the fence, dogs in between, and drinks on the veranda at eight! Good luck, you sad sons of bitches.

Thank you all, and HOOK 'EM.