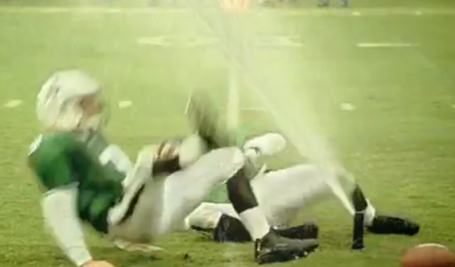 "Hey, I don't want to go home to my horrible children. Please cripple that running back for my personal convenience."

HOT DOG SLAMMER: Four hotdogs crammed into a pint glass with condensed milk poured over them. The bastard child of the Fiesta Bowl, the Insight Bowl, will now shed its technocratic shell and become known as the Buffalo Wild Wings Bowl. Please insert immediately obvious jokes about a field rigged with sprinklers and booby traps designed to take games into overtime here.

ULTIMATE NACHOS: Literally, the last order of nachos ever made on the planet. No one has ever ordered Ultimate Nachos. If you did, mist would descend from the ceiling of the restaurant. Cracks would appear in the floor, and your other diners would shriek as they fell into the void falling away into a dimensional portal opening all around you. Glomak the Unholy would at that point appear from the fog, carrying a plate of fresh, hot corn chips covered with an unholy blend of three dead and mystical cheeses. Upon eating them, a Lovecraftian madness would possess your brain, and then the Buffalo Wild Wings would collapse around you and leave a flat barren space where once there was merriment and the sound of human voices. Then no one on the planet would ever have nachos again.

MINI CORN DOGS: --ah, yes, the Buffalo Wild Wings Bowl. The bowl will feature the third selection from the Big 12 versus the fourth from the Big Ten after everyone's done selecting BCS teams. Mini corn dogs are great, because they're like soggy, gross-ass corn dogs, but there's less of them to eat. The food no one ever really craves, brought to you in smaller, slightly less disgusting installments!

RIBS AND MORE RIBS COMBO: The Buffalo Wild Wings Bowl will take place on Saturday, December 29th. While not a classic-classic bowl, it was the site of Mike Leach's greatest triumph, the long 44-41 comeback against Minnesota in 2006, so at least it's got that going for it. No one is sure what the "Ribs and More Ribs" combo is, but it probably involves stacking ribs on a plate, and then adding more ribs. Please mail the James Beard award to Buffalo Wild Wings, Meattown, Arizona, 1111meatleven.

VEGGIE BOAT: Warning: the Veggie Boat may contain meat.* We always wondered what sadness awaited the miserable denizens of Buffalo Wild Wings commercials. There's a sad little American Beauty story built into each order of wings, it seems: a guy asks a referee to blow a call to avoid going home to his harpy wife who only wants him to look at the carpet samples, a lady sits there desperate for her boyfriend's attention, a group of friends warm themselves against the chill of middle age by huddling around the warmth of a roaring bank of flatscreens. This bowl has the possibility to be beyond depressing in that sense, especially when a barkeep presses a "SPRINKLER" button, trips a running back headed for a game-ending score, and tears the young man's knee ligaments three ways in the process.

*Is made entirely of tripe and gelatin in broccoli shapes.

ASIAN ZING CHICKEN SALAD: LOL Y U NOT DOCTOR Asians are always smart and that's what makes Asian Dad funny!--"RACIST-ASS ZINGIN' CHICKEN." This bowl has to show preference towards fat coaches, or at least toward Charlie Weis at Kansas. The peak of his career at Kansas will be losing to a Northwestern team on its third-string quarterback in this bowl game and you know it.