THE ADVENTURES OF FUTURE TODD GRAHAM (A SIMULATION)

Share All sharing options for: THE ADVENTURES OF FUTURE TODD GRAHAM (A SIMULATION)

The release of NCAA 2013 allows for a lot of amateur game simulation, sure, but the most appealing facet of the game for us is the ability to climb into the skin of an actual coach, behave exactly as they do (or sometimes not,) and then see how it plays out in the virtual world of XBox football.

There is no "carry on disastrous affair with an assistant, and then wreck your motorcycle and lie to your boss" option, but you can mimic certain coaches well enough. You can pull the "Houston Nutt," i.e. having your name thrown out for a bunch of different jobs before squeezing your current employer for a lucrative new contract. You can also flirt with disaster, enjoying a 10 win season built off JUCOs and dumb luck before taking the next year off and then repeating the cycle all over again. This is also called the "Houston Nutt," and we miss Houston Nutt a lot, y'all.

We attempted to simulate being current Arizona State coach and former Pitt, Tulsa, and Rice coach Todd Graham. The rules were simple: we would make every promise to every recruit possible. In these promises, we would lean on "coaching stability" and "coaching prestige" even when it made absolutely no sense to do so. Finally, at the end of the season, we would openly lobby for other jobs whenever possible, and then take the first job we could take no matter the terms or situation. 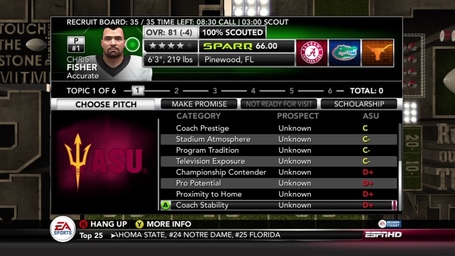 As you can see, NCAA 2013 knows exactly what's up with Todd Graham and ASU's rep. Still... 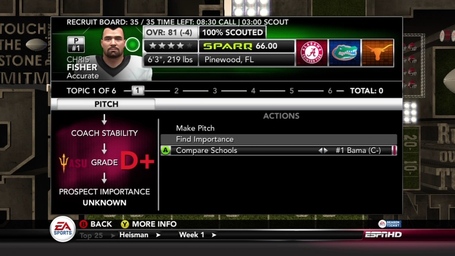 ...you haters will never know until you try, and that's why you're haters. BELIEVE! 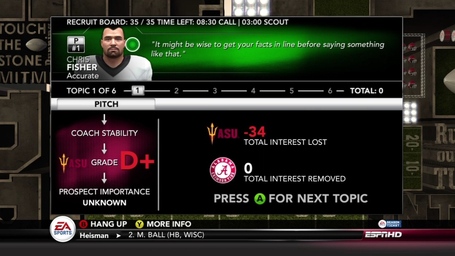 Well, you think what you want to think, dork-ass four-star punter. But what if we sweeten the deal? Todd Graham's got VISIONS, son. 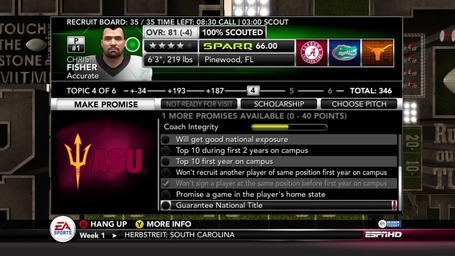 That's right. We're going to guarantee you a national title, hammerlegs. A national title. It's never been done at Arizona State, you say? Well, that's because Todd Graham wasn't the coach there, son. Surely you're a man of faith? And believe in the horizon over the horizon, and the sun that rises on days unforeseen in times unknown save for the promise they offer? And what if I throw in this sweatshirt with your name on it? Would that help, too? 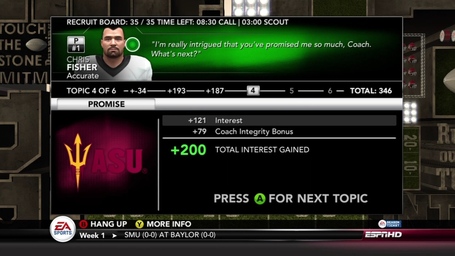 MOST REALISTIC GAME EVER. Clearly, this is exactly how it happens in recruiting. We are very serious in saying this: if you think this isn't how it goes, please consider the list of top ten recruiting classes each year, and then imagine the coaches corresponding to each team promising you anything with a straight face. You're not alone, poor Chris Fisher. You're anything but alone. 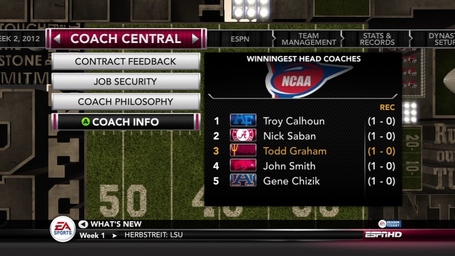 The season begins, and there's a few things you should know. We ran out of promises to make to recruits in preseason. We promised recruits everything, often in contradiction to the actual capabilities of the program, coaches, or reality. We promised everyone we talked to that Arizona State would win a Pac-12 and a national championship, and leaned on our inherent integrity and dedication to one job above all else.

We did this even when that pitch went like this:

The results clearly began to pay off: 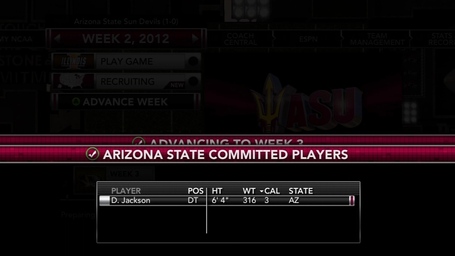 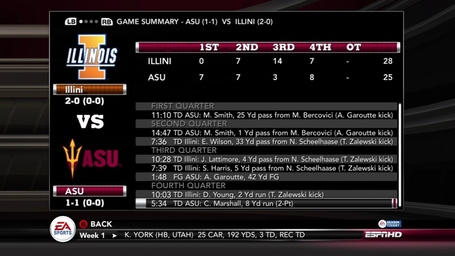 Finally, when a bowl game was on the line, and our team really needed to rally behind their new coach, they did what players do when properly motivated and united in a single committed effort. 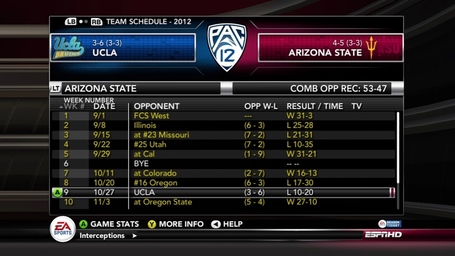 They lost to UCLA. 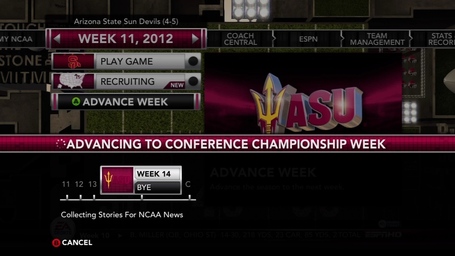 The word is both a term for the blank schedule week, and also exactly what Todd Graham is about to say to Arizona State. 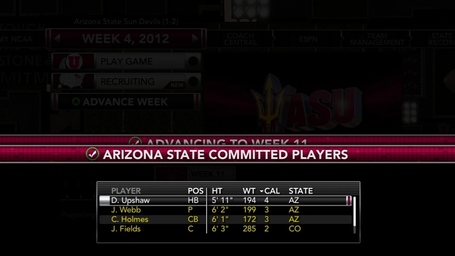 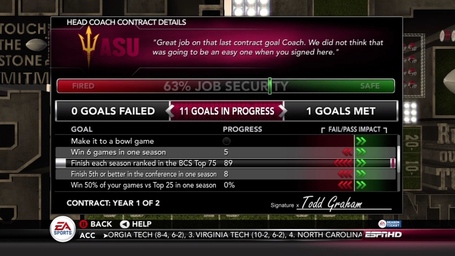 Amazingly, the expectations were so low going into the season that Graham rides high at a 63% security ranking, just behind Lane Kiffin and ahead of almost every other coach in the conference. 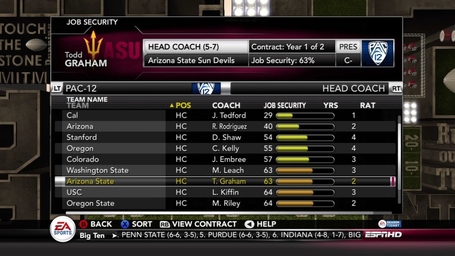 With job security like this, and the Todd Graham Protocol engaged, it can be time for only one thing. 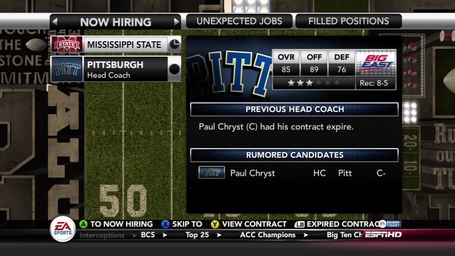 DAMMIT. It didn't even let us sniff around the job, which is total bullshit. Todd Graham would be PERFECT for Pitt. He might even still have keys to the locker room. Let's go to the long list of schools beating down our door for a 5-7 coach. Surely it's... 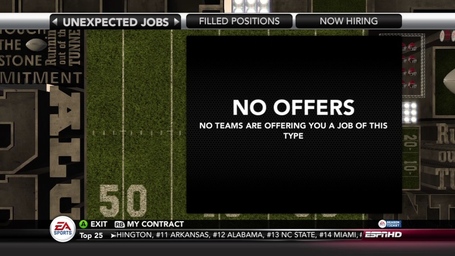 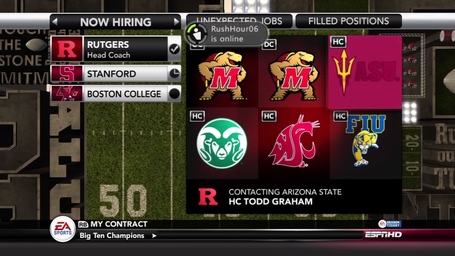 This doesn't mean we can't move on to the next Graham family reunion, though. The open market beckons, though, and what riches it holds! Grahams everywhere: in Jersey, in Palo Alto, in Beantown. But it's not like Boston College would be the first to put their hand in that particular garbage disposal, would they? We mean-- 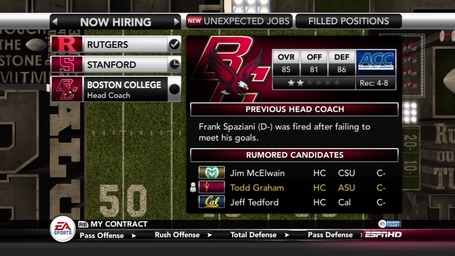 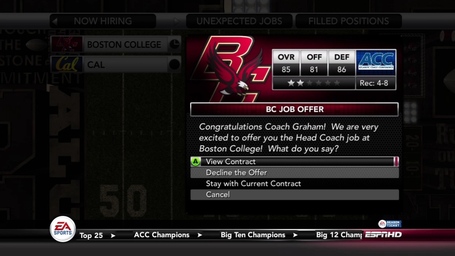 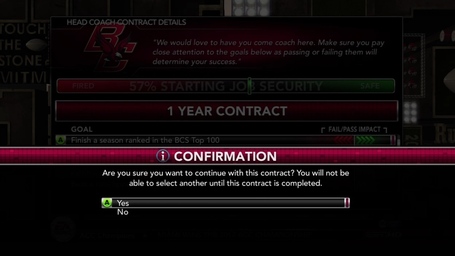 One moment of unrealism: Todd Graham does not need this screen. The answer is yes, and he is already out the door with his suitcase in hand. 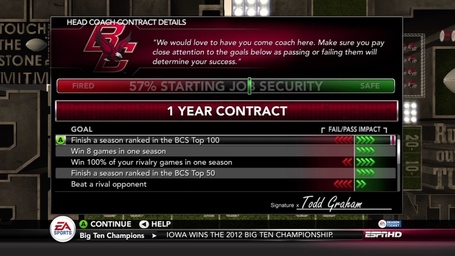 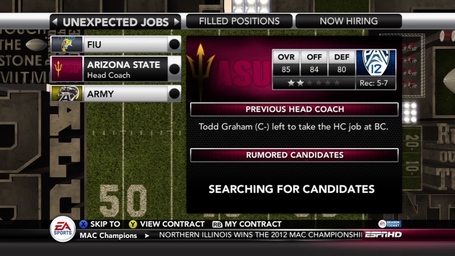 Sorry, ASU. But it's not like you haven't seen this screen before. 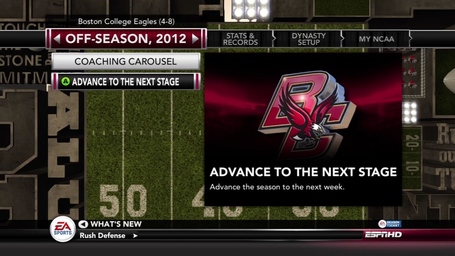 So excited to be here in the ACC, the finest conference in the land, to spend time with my family here in the New England area. 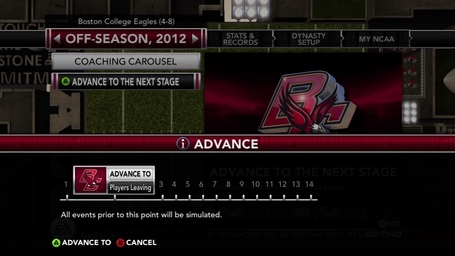 Advance to...well, that's about right, actually. In conclusion, the Todd Graham Protocol proves this is the most realistic football video game ever made. The good news is that Frank Spaziani will be fired after this coming season, BC fans. The bad news is that you will hire Todd Graham. The game is never wrong, and you will simply have to get used to this.

Massive thanks to Luke for actually simming this out, and for not dying of laughter halfway through.

This post was sponsored by EA Sports NCAA Football 13. Check out the video for the game below.