THE HEISMAN WHERE WE MAKE ERIC CROUCH HIS OWN QUANTUM LEAP

Share All sharing options for: THE HEISMAN WHERE WE MAKE ERIC CROUCH HIS OWN QUANTUM LEAP

In honor of NCAA 2013's odd decision to make your nightmares come true by enabling the Heisman Challenge, we select the five worst fits between Heisman winner and current virtual football team. 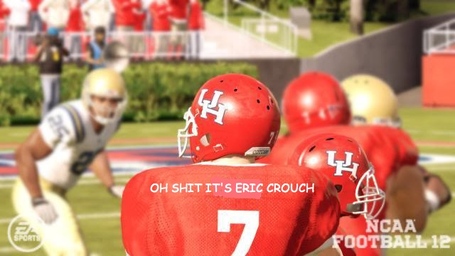 not photoshopped at all

5. CHRIS WEINKE TO GEORGIA TECH. Chris Weinke playing football was humorous anyway. He was bald, already sort of old-looking, and clearly a leering interloper bent on enjoying the campus life as only a 28 year old former major league pitcher could. (Consider Brandon Weeden the domesticated opposite, the one teammates boggled at with "Hey, hey, you have a house WITH COASTERS AND SHIT? Word.")

Funnier still would be taking the most wooden of Tallahassee's football Native Americans, outfitting him in an ACC rival's garb, and then asking his leaden feet to run the flexbone with Paul Johnson. The over/under on downs-until-dead is somewhere around 18 snaps, though the wiser bet would be the "faking injury to be taken out forever." That number stands at 13; the bet for "Digital Not-Paul Johnson snaps his elderly neck" is at eight snaps or so.<--is part of programming and you know it.

4. ERIC CROUCH TO WASHINGTON STATE. Have you ever seen a quarterback be allowed to throw two footballs at once on a play just to improve some or any chance of it reaching someone's hands? With Pac-12 officiating and Eric Crouch on Washington State, this very thing could and should happen. For additional comedy, just play with Taylor Martinez and Nebraska and don't change a thing from what is actually in the game or on the field.

Lane Kiffin: "I'm going to need you to play-fake."

Tebow: [flinches forward, running back collides with him]

Kiffin: "No, no, you need to fake a handoff to this guy here. The running back."

Tebow: "What's he doing behind me? Is that Christian? He's supposed to be next to me."

Kiffin: "Just fake handing him the ball, and then look up for Robert Woods, okay? He should be open in single coverage. He should catch it, because he's basically an octopus who lunches on amphetamines. Just arms and sped and everything. You don't have to do anything but heave the ball down the sideline. Got it?"

[Tebow puts hands way too far under center. Snaps ball to himself. Center falls over. Slaps running back in stomach with ball. Bursts spleen. Running back is out 6-8 weeks. Tebow somersaults, springs up, and throws the ball into Song Girls. Screaming. A white sweater stained with blood. Horror.]

Kiffin: GET ME MUSTAIN.

2. TROY SMITH TO LSU. You know, because you can't use Jordan Jefferson in this year's edition this would be the closest approximation of Les Miles' greatest quarterback named "Jordan Jefferson." (Alternate simulation: Heisman winner LES HORVATH, the Troy Smith of his time.) We're going to just make Troy Smith the Sam Beckett of the game, time-traveling with him to awful teams he must die again and again on at the orders of some malicious god named "us." (p.s. Go Gators.)

1. REGGIE BUSH TO AUBURN. [AN OFFICIAL FROM THE NCAA BATTERS DOWN YOUR DOOR AND SETS YOUR XBOX ON FIRE.]

This post was sponsored by EA Sports NCAA Football 13. Check out the video for the game below.