STILL MAROONED IN THE 'HAM

Share All sharing options for: STILL MAROONED IN THE 'HAM 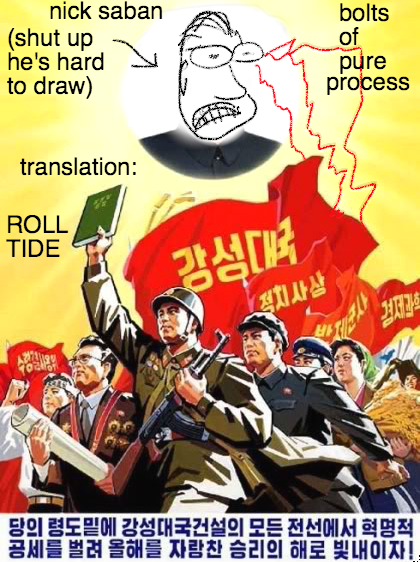 Nick Saban just finished his session, and we learned the usual things. He thanked the media, and as it always does cartoon balloon letters spelling out "S-U-C-K-I-T" floated out in front of the podium as he said it. He made jokes about how much older Spurrier is than he is, and how he was thinking about wearing a visor. He knows nothing about UAB, thinks Alabama football is not bigger than the University--

[FALLS ON THE FLOOR LAUGHING, RECOVERS][

--and then made the really fun comment about mediocre people not liking high achievers, and high achievers not liking mediocre people. Nick Saban knows who you'll assume you are in this equation, and this is why he is better at his job than you are. Did we mention his kickass blue suit? This is all news, and you should pay attention like it actually matters.*

*May need coffee and a day not spent in a sunless ballroom.

In other news, Jim Delany is advocating for sweeping powers to actually fire coaches who embarrass or disgrace the Big Ten. We make a lot of jokes about the subtropical tendencies of the SEC's states to lean toward petty despotism, and can continue to make them because that's not petty despotism. That's plain ol' fashioned despotism, the kind that throws people down holes on the whim of one dude. Big Ten, just when we think you've lost that Soviet touch, you reel it back in, man.