SHIT'S GOING ON THAT ISN'T SEC MEDIA DAYS While Fearless Leader and his gang of elite super friends continue to bring you the goods on just how big Dan Mullen's cranium is and the frightening non-zero number of battle raps bros from AL.com have won to point, we point out that there are other things going on in the world of college football that aren't in Hoover, Alabama. AND THEY ALL HAVE TO DO WITH PENN STATE, HAHAHAHA /cries

STATUE OF LIMITATIONS. HURR Penn State's going to decide what to do with the contentious Joe Paterno likeness in the next 7-10 days. You'll feign righteous indignation either way. Because the kids, man. The kids. If it were up to Celebrity Hot Tub and I, we'd have the damn thing painted gold, given a new lid, and some new added, upgraded features:

I'LL BE WATCHLISTING YOU The 2012 Davey O'Brien trophy pre-pre-pre-pre watch list of candidates is out. And worry not, because all of them will clearly be in the mix for this year's award and the list is no way just an arbitrary way to remind you that such a trophy even exists. Not at all. Particularly when Tyler Brey, Chris Relf, and Dayne Crist were all on the same list at the same point in time a year ago. This ensures that at least 5% of those on this year's will wind up committed on an island they think is actually a 1950's prison, homeless, or wearing adult diapers with Charlie Weis.

BYE BYE RAY-RAY The Ray-Ray Armstrong era at the University of Miami is no more. The Hurricanes athletic department announced this morning that after a year marred by multiple suspensions and injuries, the talented Hurricane safety would be moving on, being falsely imprisoned for a crime he did not commit, and having a folk song written in his honor. Despite never fully realizing his high NFL draft pick potential, he was still at times fun as hell to watch. North Alabama awaits, young squire.

AND NOW, FOR SOMETHING COMPLETELY DIFFERENT 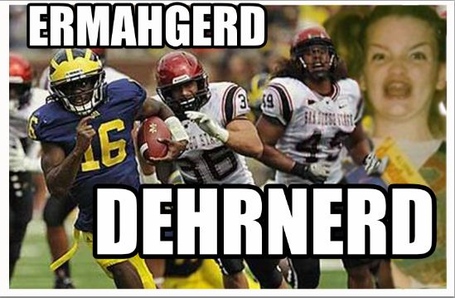