IF YOU NEED MONEY JUST ASK HAWAI'I FOR SOME

Share All sharing options for: IF YOU NEED MONEY JUST ASK HAWAI'I FOR SOME

June Jones got this idea late one night after a few drinks: he would just email the old Hawai'i AD, tell him he was going to have a benefit concert with, um...[rifles through old-school CD tower]...Stevie Wonder, yeah, that's it. And if he just sent a $200,000 check to P.O. Box 1234 Yourbutt, Arizona and put "STEVIE WONDER CONCERT" in the subject line, then Stevie'd show up.

So he had a drink. Maybe two. And he sent the email. The then watched House Hunters International for a while, and then fell asleep on the couch. When he woke up he'd spilled the drink on the couch. Do you know how hard it is to get the smell of banana rum out of a couch? Oh, it's terrible. You might as well call the EPA and abandon your house. June Jones checked his email before calling the EPA, and that's when he saw it.

So then June Jones faced that great question: how far do I go with this? He might have decided to just end it there, but somewhere between the banana rum fumes, and the moment, and the deep boredom of the offseason, June just went for it. 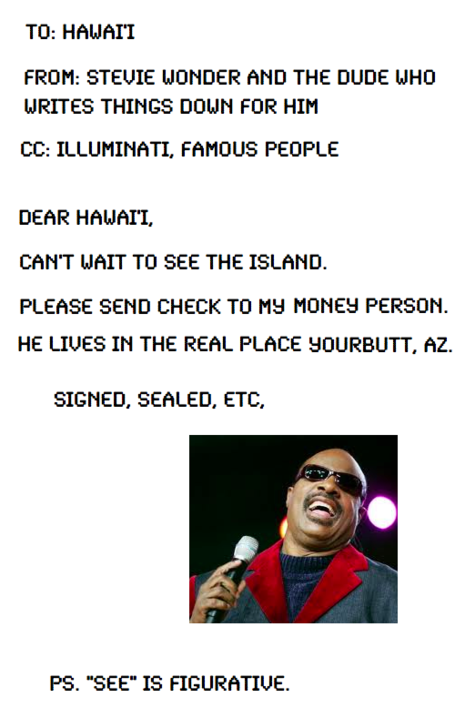 So many things about this are false, like the part where Stevie Wonder is "blind" and "June Jones tries to con Hawai'i athletics out of $200K because he's bored and sort of drunk." What isn't false: that someone may very well have scammed Hawai'i out of that sum with nothing more than a few well-placed emails, phone calls, and the promise of a Stevie Wonder concert fundraiser for Hawai'i athletics. What really happened may actually be less explicable than the not-so-farfetched scenario we just made up.

(Imagine June Jones scrambling to found "Yourbutt, Arizona," overnight, and then attempting to get a post office set up just to intercept this check. It's one of life's great unwritten comedies already.)

P.S. Before you say, "Oh, you collegiate bumpkins," did you know Pete Rozelle once invested money in a machine that promised to turn sand into gold? Like, a LOT of money? And lost it all, because you can't turn sand into gold? Roger Goodell probably just writes checks to the Chicago All Saints Hospital to total strangers all the time, and doesn't even ask why they insist on using the abbreviation for it in the TO: line.)