ALL WHITE URRTHANG. Anchor of Gold is calling them "The Stig" variation of Vandy's uniforms, and whatever you may care to call them we think they look like awesome Chinese Death Phantoms. 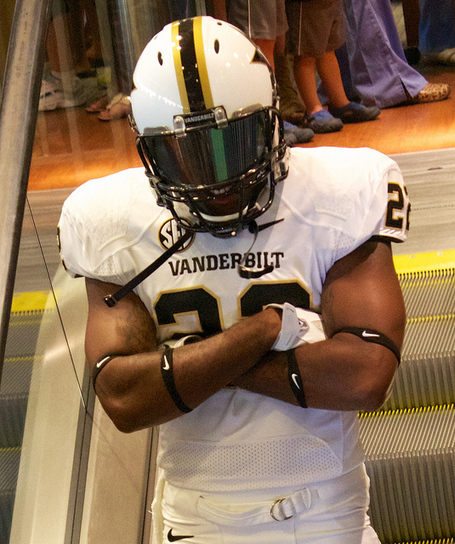 You're all like, "Hey, why are you leading the Index with new Vandy uniforms? That's not news!" Well, it's July 12th, and aside from Brock Lesnar's birthday there's no real news going on and--

THE FREEH REPORT CONFIRMS EVERY WORST SUSPICION YOU HAD EVER ABOUT THE PENN STATE CASE. It's the worst shit imaginable, and condemns everyone from the top down at Penn State including Paterno as being complicit in allowing a known pedophile to work in their midst even after the 1998 investigation. Statues are for dictators and noble pets of public note. Only one of them is worth your time, and it's not the one that involves something on two legs.*

*AND THOUGH WE'VE SAID IT BEFORE: leave the statue up. You were the ones who put it up there, and you don't need to waste time and money taking it down. History is history, and as nice as it would be to confine the nasty bits to the dustbin, this one weighs too much to move. You made it, you live with it, and you try to explain that to whomever cares to ask about it. We spent a lot of our youth in a town with a confederate soldier on a pillar in the middle of a town square, and when our children ask who that is, we'll say "a poor person who was probably as racist and ignorant as his neighbors, and angry enough at life to be duped by shitbag plantation owners into running headlong into a line of cannons. He probably regrets a lot of it, and now most people driving by think he's a Duane Allman, Tim Richmond, or Keith Whitley memorial or something. Let's not have you go to war, ever, okay?"

For the record, our Civil War ancestor deserted, most likely because the food sucked and he ran out of underwear. We've read the letters. He complains about the food a lot, so we're pretty certain we're related by blood and by name. We salute his strategic acumen, and hope he got some decent country ham when he got home.

BECAUSE THAT'S A WORTHY INVESTMENT OF YOUR TIME AND ENERGY. The Book of Recruiting Kells adds another disturbing chapter in the long list of chapters full of people behaving worse than you could possibly imagine:

"When I decommitted, it was crazy," said Seals-Jones, who committed to the Longhorns in February. "I got death threats on Twitter. A couple cars in my neighborhood we didn't know would drive by house real slow. I live in the country, so the cars that do drive by, you know who's in them.

Those people driving by weren't possible assassins, Mr. Seals-Jones. They were Mack Brown, pining away and waiting for the right moment to greet you at the door wearing only whipped cream and a smile.

DENIAL! Because if you didn't know the Saban-spawn case was crap from the amazingly well-written complaint, the legal representation of the Sabans would officially like the court to recognize said crappiness. (And say what you will about Clay Travis: when it comes to this kind of shit, like the New York Times HE IS ON IT.)

WE WILL SOMEHOW GET THIS WRONG. The SEC is looking into wireless communication between officials, meaning even faster confused gesturing during important plays.

ETC: Rob Lowe, meet Eric LeGrand. We sort of think of Spurrier as more of an Oklahoma type, if only because the legacy of Switzer has them more prepared for a loudmouthed barbarian of a coach.