The Cupdate, as always, is brought to you by Boardmaster Brian and his massive manhood, used along with Reggie Nelson's as broadcasting apparatus to let the world know of all the extremely unimportant things happening at SEC Media Days. 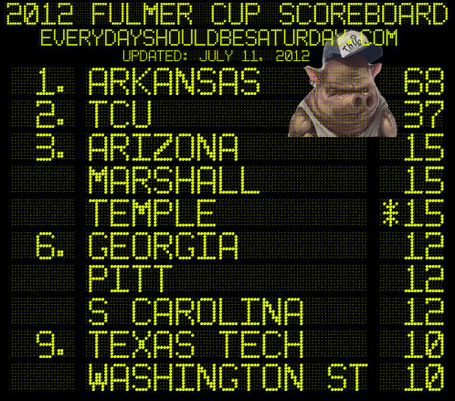 FLORIDA STATE. We spent much of our undergraduate life driving on a suspended license and in possession of something illegal, so we understand, Greg Reid. The Florida Department of Drivers' Licenses is designed to make money, not actually keep you legal, and if you miss a single dot on the paperwork it's like another five thousand dollars for another sheet of paper and the life-energy it takes the horrible office troll stuck working at the DDL to fetch you another sheet of paper.

A friend of ours is an attorney. A practicing attorney in his 30s who is still working and not currently encarcerated, mind you, and someone who loves children, babies, and puppies to a degree one might call "disgracefully soft." He wears a tie and obeys all major traffic laws, and eats about 200 calories more than he should a day.

There is nothing abnormal about him whatsoever. Yet there he stands, trying to resolve a suspended license he has from something like not paying a parking ticket he got in Miami. The following real conversation happens with him, the clerk, and a county sheriff in the room:

DDL Clerk: "I'm afraid I have to take your license now. It is suspended."

DDL Clerk: "I'm afraid you will have to find another way home."

Attorney: "You can't stop me from driving away, can you?"

Attorney: "I'm driving out of here." <---at this point has gone completely mad and no one knows it, not even himself.

The attorney then runs out the door--a good thirty pounds overweight himself--and to his car. He turns on the car, accelerates, and then nearly drives into the door of a police cruiser screeching to a halt in front of him. The redfaced sheriff's deputy, seconds from his heart exploding, exits the car in a very bad mood. He brought a friend, too, another trooper whose cruiser is sandwiching in the attorney's car from the passenger's side.

Somehow he is still free, and miraculously received only a ticket for the incident. The point: suspended licenses make even the most modest, mild-mannered person into a raving, anti-authoritarian Guy Fawkes in a Brooks Brothers shirt.

Greg Reid's two misdemeanor charges get him two points, and a bonus point for repeat offense takes him to three points for the Noles in the 2012 Fulmer Cupdate. Oh, marijuana possession: you'll be the "caught with bathtub gin!" of the early aughts yet!

OHIO STATE. Storm Klein's domestic abuse and assault charges are misdemeanors, so even with the Hitting Girls bonus point the Buckeyes only pull in three points from the incident. Urban Meyer has booted Klein from the team for the moment, though he has said he is open to bringing Klein back if the charges are dismissed or otherwise cleared up.

HAWAI'I: Someone please supply the islands with more cabbies. Three points for Hawai'i for the third DUI this year for the Warriors, with the standard DUI taking two points and a bonus point for COME ON YOU HAVE PHONES CALL A CAB. To be fair, punter Alex Dunnachie does have a possible legal defense in claiming he was just "driving while Australian."

TEXAS TECH: And while you're driving west, cabbies of the world, please take a brief spin through Lubbock. Two points for garden variety DWI for the Red Raiders.