Share All sharing options for: A MORE GLOBAL DEFINITION OF CONFERENCE REALIGNMENT

Euro 2012 is on, and we have a thoroughly uninformed guide to it available for your perusal. As is our wont from time to time, let the EDSBS staff also consider the countries we need to invite into college football immediately for the right and wrong reasons. 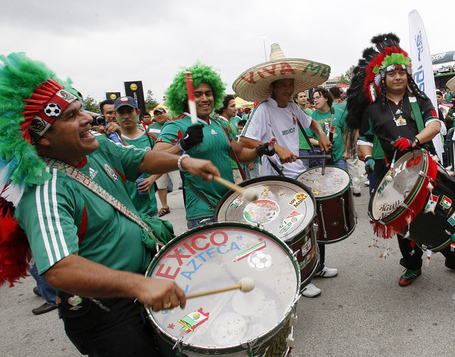 MEXICO. The marching band: 200 trumpets and 100 guys playing acoustic basses you can't even hear. The mascot: a talking human heart with blood spouting from realistic articulated veins and arteries atop its head. TACOS.

AUSTRALIA. How does one get banned from an empty stadium? Put Australian fans in the Big East, and you will find out exactly how this happens, most likely with casualties.

CUBA. Auburn-esque in being ruled by an immortal despot, close to disaster at all times, and still yet alive. Havana and Toomer's Corner both do 1963 with scary accuracy.

SOUTH AFRICA. Those bugs would make beast mode tall corners. "Coach Die Antwoord, must you wear those shorts?" Pretty similar history to Alabama's, and therefore should be an instant world power.

ENGLAND. There must be a sport they can play together as a team.

CHINA. Their depth chart has a tiny James Cameron in a bathysphere at the bottom.

MALTA. Because Holly needs a football team she can count on.

KENTUCKY. It's about time they're good at something other than paying amateur basketball players, bourbon, and horse racing. #3rdworldproblems

BOTSWANA. Because we need a "Botswana Meat Commission F.C." in college football.