HANDS UP, MIZZOU. He looks terrified, and perhaps should be. 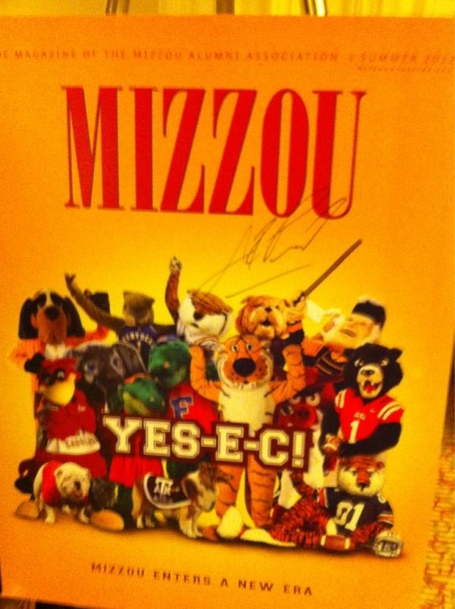 The other really choice part of this photo is Aubie just laying on the ground high on spice, but still finishing the drill by holding up the exclamation point. The graphic designer here clearly forgot the dogs at the last moment, and just sort of threw Reveille in there. Naturally, she's looking off-camera and on her own planet, and this is pretty much appropriate for lovable, weirdass College Station. Bonus points for making South Carolina into the Chet Haze of the SEC, posing in a B-Boy stance and about to fall over. (via SEC_PR Guy.)

CHOOSING THE CHOOSERS. The media panel here is impeccable, but as a member of the media we would think that. We'd add Mike Bellotti to the list of possible retired coaches since he's a.) young enough to provide a different perspective, and b.) because he's a Pac-12 guy on a hypothetical committee lacking some best coast tilt.

WE WILL NOT BE OUTMANNERED. Arkansas' next step on the way to glory will be politely taken. John L. Smith has decided that etiquette classes are necessary for the greater good of the program, and stop, just stop. You really sort of wish you knew what fork was for what, right? And this would have been sort of useful in a non-football way? We're all admitting this, yes? Great. Now that we've all admitted that, please go ahead and laugh at the unbounded LULZsome potential of the brief but happy John L. Smith era, and remember that he will probably do something like lose to Ole Miss but beat Alabama in 2012 just to warp your understanding of reality.

MICHAEL FELDER REALLY DOES CARRY A COOZY AT ALL TIMES. We're a bit breathless on the Solid Verbal,but it is true and confirmed: Michael Felder really does carry a beer coozy at all times, and washes them in the back pocket of his blue jeans in order to properly break in both pants and beer coozy.

THE ACC'S POTENTIALLY FATAL TELEVISION DEAL. When business writers turn to college football, it's always uncomfortable, and especially uncomfortable when it gets to the nasty business behind the ACC's television deal.

NORTHWESTERN, STUCK AT BEING THE LAST FINICKY MAN. Sippin' On Purple suggests the unthinkable, i.e. that the institution stoop to the levels of--gasp!--Vanderbilt and Duke when it comes to athletic admissions.

PENN STATE'S OFFENSE MAY PROVE ITS EXISTENCE. Bill O'Brien means to put the hurry-up, no-huddle in a prime spot in Penn State's offensive repertoire. Enjoy really fast punting for the first month of the season until everyone starts to really get it, Penn State fans. #TURBOPUNT

HOLD ON BK. The King could return if Brian Kelly continues to actually recruit quality talent on the line and through the linebacking corps and along the linebackers, which he's doing. Now, just prevent them from transferring.

ETC, ERRATA, EGREGIOUSLY FUNNY THINGS THAT SHOULD NOT BE. If you find this funny, you are a horrible, horrible person. Killer Mike's video for "Big Beast" is really NSFW, but you don't like employment, do you? Fantastic choices as always begin in Texas. The trailer for Django Unchained had us at Christoph Waltz going "Oh very waillll...." There is a Phoenix Wright Musical, and we are buying a plane ticket to Tokyo as we speak. Prom picture goes so very right. Bomani Jones on Russell Westbrook, and others, but really on Russell Westbrook's geometrical wardrobe. Wikipedia Brown is the only thing you must read today.