CONFESSIONS OF AN SEC FAN TO A BIG TEN FAN

Share All sharing options for: CONFESSIONS OF AN SEC FAN TO A BIG TEN FAN

YOU WANT HONESTY, BIG TEN? YOU GOT IT. AN SEC FAN CONFESSES THE TRUTH ABOUT YOUR CONFERENCE AND OUR OWN.

1. We don't really hate the Big Ten. We think it's boring, but that's mostly because the places involved are boring to us, not the teams. You probably find country-ass Southern college towns boring, and you would be right for the most part unless we're talking about Athens, GA, the finest university town on the planet. Starkville is not Las Vegas, unless you mean Las Vegas, Mississippi, a horrible error in cartography that turned into a casino for lungfish between Ittabena and Toranado Tire Cover, Mississippi.

(You don't know any of this, since like most Big Ten and SEC fans carping at each other your actual travel through the region is scanty, and you're shamefully ignorant of your own country travel-wise.)

2. In fact, here's a shortlist of the Big Ten Teams that are ridiculously fun to watch:

3. In fact, SEC football in 2012 is nigh-unwatchable in terms of entertainment value. We're not saying Big 12 pass coverage is the ideal, but it would be nice for someone besides Arkansas to play offense, and not just try to run out the clock the minute someone gets a ten point lead. All the things we mocked the shit out of in Tresselball? The dominant mode of football right now in the SEC, Sabanball, is just as bad, and for the non-Alabama fan just as dismal to watch. (Yes, especially when you're on the kicking end of that headkicking.)

4. And to beat you to another obvious punch, we're not racist. Except for that guy. And that guy. And those guys over there. Okay, there are lots of horrible racist people in the SEC fanbase. There are lots of horrible racists in your midst, too, and you won't know it until your sister brings home a black dude, and suddenly your mom becomes a character out of Crash. We probably have more of them, though. By history, we've got some spectacular grand cru racists, and they're probably more racist than yours. In fact, you should point that out. It's a great conversation starter, and a cutting insight on par with the pithiest quips of Bill Maher or Dane Cook.

5. In a related note, we currently have three African-American head coaches, and the Big Ten has none. True, the conference hired Denny Green long before the SEC even thought about it, but since then it's been slim pickings at best. (This is largely due to Big Ten coaches enjoying long tenures, but we'll still point that out here.)

6. We don't all like sweet tea, either. Personally, it's not our thing and never has been because seriously, you get diabetes fast on that shit, and then get the kind of lumpy obesity that makes you grow a third kidney and ride a Rascal everywhere. We remain a kind of apostate for even saying this, but sweet tea and all other teas are ghostly proxies for real beverages. James Bond preferred coffee, and blamed tea for the decline of the British Empire. He was right.

7. We also know what's up. The SEC's trying to pack the court with the playoff proposal of "the best four." We're doing this mostly because we can, and because the general perception is that the SEC is the strongest football conference in the nation right now. The Big Ten's arguing for conference championship as a requirement for one reason: it's the best way for the Big Ten to get a slot, especially if the only two teams really competing nationally and on a regular basis out of the Big Ten are Michigan and Ohio State. (And historically, this is and likely will be the case with Wisconsin and Iowa making periodic cameos in the race.)

8. Right now, the SEC is not that much different in terms of actual powers. As it stands right now, the SEC is a two-and-a-half team league. There is Alabama, and then LSU, and then whatever wants to rise from the ashes of the SEC East. Do you know, as a group, how many ranked teams the SEC East beat last year? Just four, and none above the #17 ranked Nebraska team South Carolina defeated in the Capital One Bowl.

9. We'd love to make that game a one-game trend and thus a statement about how much better the SEC's teams are than the Big Ten, but historically using South Carolina to make any kind of steady bet is a madman's game. 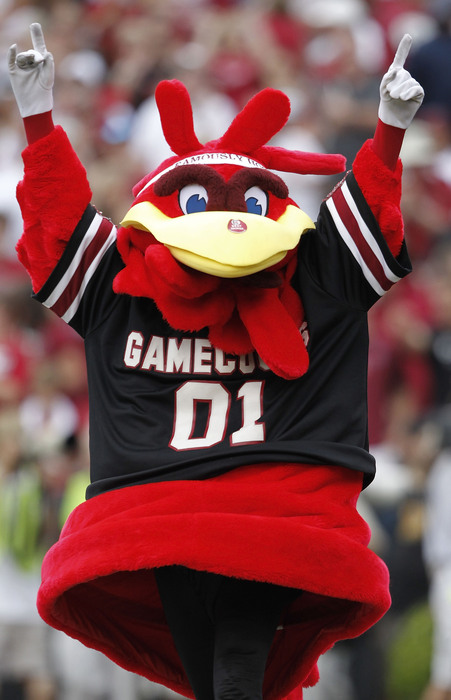 BET ON ME DOING ANYTHING CONSISTENTLY AND LOSE YOUR LIFE

10. We know your schools are on the whole better academically than SEC schools. But for fuck's sake, no one will ever, ever be awed by your diploma from Ohio State, Indiana, or Iowa. We repeat: no one, ever, anywhere in the history of the world, will ever stand back in awe as you unveil the tiny laminated grail of purchased pedigree from your pocket that reads "BIG TEN MEMBER." After the age of 25, it might as well be a fro-yo punchcard, but without the benefits of the occasional free frozen yogurt of your choice

11. In fact, should you ever stumble into a small Southern town, you might not want to mention having a college degree at all. It won't help you get whatever you need. Cash, however, will.

12. The notable exception to this general rule would be Michigan (smug nods) and Northwestern. Northwestern will only be impressive because you will have to explain to someone just what Northwestern is, and then lay out a sound intellectual defense of the institution after being given a list of graduates including Zach Braff, Seth Meyers, David Schwimmer, Gregg Easterbrook, Mike Greenberg, and Rod Blagojevich.

13. The head of our conference is no more or less evil than yours. He just says less--way less. We've said it elsewhere, but the often odious Jim Delany is a great commissioner for the Big Ten, and in that role has to be a serious assblister for everyone else. He's also a target eight miles wide, especially on recent New Years' Days. (He went to an ACC school, so blame that.)

14. We're also not convinced either Slive or Delany is a genius. Both are soldering their conference's finances to a cable television system whose revenues will likely decrease over the next few decades. Neither has been willing to completely divorce college football from the insanity of the bowl system. They're both functionaries with few original ideas and less power to change things than one might think, bound by their own conference's interests and the demands of university presidents.

15. And interests are what's pushing this, not fairness, or some concept of doing things right. The SEC and the Big 12 will likely concede certain things, but ultimately get their way via a display of ugly brute force. We'd like a playoff, but it won't happen without a committee/poll/subjective element. That element is going to lean in favor of the SEC. That will not because of mere sinister politicking by cunning bumpkins.

16. On that: there's this thread to the Big Ten's arguments about the actual quality of the SEC that blame some kind of poll-rigging or evil backwoods conspiracy, and there's this [holds fingers apart just so] much truth to it. Some of the SEC's powers do not take out-of-conference challenges. (COUGH COUGH FLORIDA COUGH.) Some of the SEC's powers stock up on cupcakes. There are two notable recent exceptions to this: LSU and Alabama, both of whom have been unafraid of playing big-name teams (especially early in the season.) Alabama and Michigan play each other in September, without fear or shame or weirdness. We'd love to see more of this, because it is INTERESTING and AWESOME.

17. The SEC's recent dominance, though, is not just the byproduct of corrupt systems convoluted by arch hillbilly villains. (And really, pick a stereotype. We'd love for you to settle on one. We can't be brilliant rural puppeteers of men and drooling morons at the same time, no more than you can be some kind of prairie saints duped by cunning rednecks AND quiet, polite, upstanding genius warrior poet-saints.) The conference has been excellent over the past ten years, and should be given the cost: we spend a ridiculous, nay unreasonable amount of money on football. We bought our way into this spot with cash, not virtue, character, or inherent superiority.

18. But in the larger scheme, this is really in the hands of university presidents. Lizard people are truly in charge of this whole thing, and now you know just how slightly screwed we all truly are. A playoff is happening: yay, that's fantastic. We'll probably end up with something we all hate in part because...well, like this:

At this point it's clear that most fans don't have the same priorities in mind as the people in charge of the leagues they're fans of—see SEC expansion—and arguing with them on the internet is pointless.

He's right. There's no triumphalism deserved on any side here. This is all taking place high in the rafters of the church, and those of us in the pews will do what we always do: pray to the God of our choice who will never do us the favor of confirming or denying our grand and random assumptions about the world.

19. And in the end, this matters so very little to your basic fandom. It's a cool new wrinkle, yes, but you'd probably watch the game by candlelight. When they turn the lights out on this whole thing, we'll just hum. That hasn't changed, and wouldn't change. The strength of the sport's cultural pull lies in you being from there, and us being from here. Until they relocate Ohio State football to Los Angeles, or Florida football to Charlotte, the nativism of college football--the tribal differentiation--is what defines it from pro football. In that desire to differentiate, we are the same animal. We're just the one with the slightly malformed amygdala.

20. Well, that and we both enjoy a system reliant on undercompensated amateur labor working long hours without proper benefits. That's something no conference can ever claim superiority over, especially now that the SEC decided to stop openly signing 98 recruits a class.

21. One open admission of a regional prejudice, though: we're less reasonable about football, and that can make things far more fun and terrifying than they ought to be. We happen to enjoy the phantasmagoria of being from where we're from, but we're from here. If we didn't enjoy it, we'd go insane, or have to move to some more reasonable place where we'd bitch about how stultifyingly normal things were. It also might mean keeping a coach for longer than three years in developing a program, too, but you know how addicted banana republics are to the sweet call of a good coup d'etat. We simply can't pass them up when they come along.

22. PS. Your food IS boring and bad. To be fair, most food is by definition mediocre, but damn, open something besides a high-end steakhouse every now and then, Midwesterners. We blame Scandinavians for this and so much more. Chicago, you're sort of off the hook on this, but only sort of since you're ground zero for the steakhouse plague that swept our country in the late '90s. NO I DO NOT WANT MORE FIFTEEN DOLLAR TUBS OF CREAMED SPINACH okay a little more please I guess while you're at it okay mmmmm creamed spinach you're not so bad--