NOVEMBER 3RD IS THE DAY YOUR LIFE PEAKS

Share All sharing options for: NOVEMBER 3RD IS THE DAY YOUR LIFE PEAKS

The Thursday Friday night game that week is Washington at Cal. (The Thursday night is VT v. Miami. Yessss.) Wacky Tulsa goes to Arkansas, Oklahoma visits giant-killers Iowa State, Houston and East Carolina will attempt to short out the scoreboard, and Pitt goes to Notre Dame. Michigan State hosts Nebraska in a grim glare-off between Mark Dantonio and Bo Pelini.

You might be concerned about November 4th. We assure you, this is beyond our concerns. November 4th has been cancelled, and does not matter. 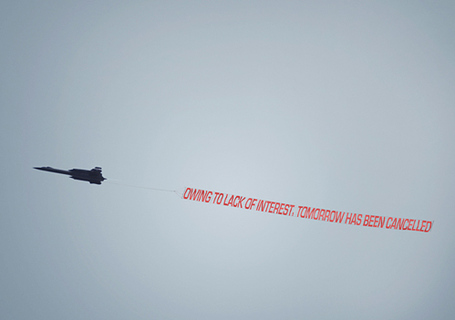 Mizzou also makes its first visit to Florida, too. THAT IS HAPPENING AND WE DON'T EVEN KNOW HOW TO FEEL ABOUT IT AND THAT'S WHY WE JUST THREW A BRICK THROUGH YOUR TELEVISION. (Not ours, of course. We need it for November 3rd, 2012. (Via.)