CARS REAL BIG, CONFERENCE REAL BIG. You're just now realizing how weird this will be, right? That every team in the Big 12 will have to fly to Morgantown, drive through the weird cornfields shockingly close to town, and play a game in Milan Puskar's playpen, right? 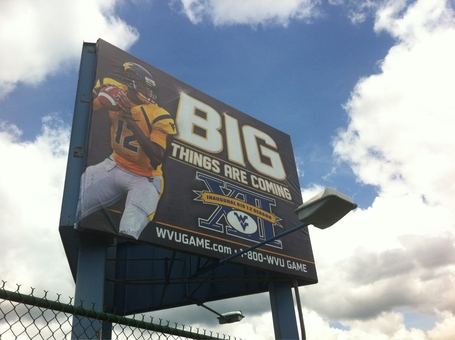 We can't wait, especially for the 11/17 game against Oklahoma in Morgantown that just has disaster written all over it for the Sooners: weird game, on the road, eerie fog drifting off the hill down into the stadium, a WVU offense in full swing, and the time of year when teams start dropping games for no reason whatsoever. (Via.)

CLEMSON HAS A SPECIAL MOMENT WITH A NOW-FORMER RECRUIT. OLB/DE Isaac McDonald got his scholarship offer from Clemson dropped, and everything worked out way worse than everyone expected. Dabo probably slams the phone at the end of every conversation, mostly because he likes the way it sounds.

THE OTHER GUY IS THE ONE YOU HAVE TO WORRY ABOUT. The thing you worry about with someone like Tommy Rees isn't the guy who learns the playbook and understands things in theory, but the guy who appears when decisions have to be made in a split-second. That guy's the terrifying one, and the one you unfortunately only see when you put someone under pressure in a game situation. (And he throws a pick at the goal line.) (That goes back 99 yards for a TD.)

RANDY SHANNON GETS PAID. Former Miami coach Randy Shannon has settled with the university for an undisclosed sum of money. Shannon likely can't talk as a condition of the settlement, and that's handy because Randy Shannon says exactly 39 words a year, and he ate out twice so he's only got like 13 left for the year.

THAT SEEMS GENEROUS. In the listing of team ratings for the new version of NCAA, Florida's offensive rating is not a series of wingdings and sad emoticons, and is therefore inaccurate.

ETC: Still a horse. South Carolina graduations have standards, but we're totally on mom's side here. This is how a piece of technology dies. It's clearly a scene made by someone who's done cocaine.