FULMER CUPDATE: MICHIGAN IS SO HOOD

Share All sharing options for: FULMER CUPDATE: MICHIGAN IS SO HOOD 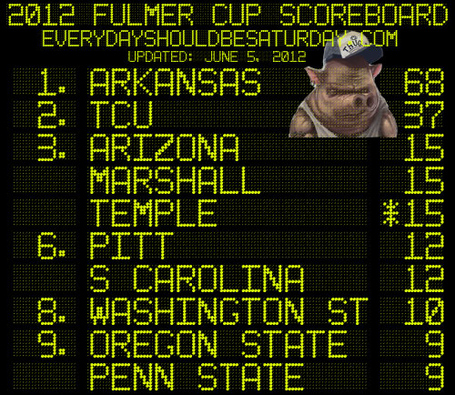 MICHIGAN: It's officially the slow season in Ann Arbor when the eyes of local law enforcement turn to protecting the structural integrity of car hoods. Perhaps we're overlooking the unique status of vehicles-as-citizens in Michigan, though, something car manufacturers forced on the state legislature decades ago in order to ensure cars could vote via absentee ballot for industry-supportive candidates. (The health care costs from supporting derelict American cars in the 1970s is now simply crippling whole economies, but that's public policy for you.)

Will Campbell festively attempted to slide across the hood of a car at 2 a.m. on April 7th. You know the slide: a full Dukes of Hazzard, Fast and the Furious type hip slide across the smooth, polished metal of a car. Provided you're not wearing shorts that ride up, it remains one of life's true great pleasures, especially if someone was stupid enough to wax the car for you beforehand. (Car waxing remains one grand excuse to spend time away from your family in the driveway alone, ranking only behind "Yardwork" and "checking out the roof.")

Campbell weighs 322 pounds. Car hoods usually only encounter this kind of stress when a deer flies onto the hood at sixty miles per hour, and Will Campbell is one very large forest-dwelling mammal. The metal buckled, an officer heard it, and this is how you go from car-skating street daredevil to felony charge awardee in a single leap of your large, festive ass.

You are not imagining this: Will Campbell is charged with goddamned felony for being a big dude on a car hood, and will earn four points for the combined felony and misdemeanor charges. Freep headline if this were the Rodriguez era: "WHY ARE MICHIGAN FOOTBALL PLAYERS ASSAULTING FELLOW CITIZENS? AN INVESTIGATION." This is the only fair and logical response to this entire situation.

OHIO STATE: It's been a good couple of weeks for Midwestern law enforcement. You may not hop on a car hood in Ann Arbor without getting a felony, and one many not urinate and then run from the police without a fervent chase in Columbus.

(Columbus, btw, is fine, but something about the entire city just begs to be peed on. It might be the alleys and numerous fenced-in yards, or maybe the bars strung so close together, or simply the strong college atmosphere and general dressed-down feel of the place, but Columbus might be one of the most inviting places to publicly urinate in the United States, and is at least top five. The other four: Asheville, North Carolina; Miami, Florida; New Orleans, Louisiana; Boulder, Colorado. BE FREE MAN.)

Jake Stoneburner and Jack Mewhort, both born to be Buckeyes simply by name, were arrested for obstructing official business, aka running from the police when they were spotted allegedly urinating in public. Good: they avoided felony charges when a policeman broke his thumb, an easy entry for a prosecutor to really amp up the charges, and also avoided having police dogs sicced on them when Mewhort was hiding after the chase. Did you just imagine an offensive lineman trying to look inconspicuous? Have you ever seen a Great Dane try to hid behind a lamp? It's the same effect.

Bad: they're both suspended indefinitely, and earn Ohio State three points (two misdemeanors, one bonus for the caper/chase) in the Fulmer Cup. As Holly would say, Mark Richt has already lost control of Urban Meyer's Buckeyes, and no one's talking about it, dammit.

BOWLING GREEN: The MAC fears no one! Why, if they were to rob someone of their wallet, they'd probably just stroll right up, punch them in the face, and then demand their wallet M.O.P.-style like a MAC team and their seventy-five very excited road-tripping fans storming a Big Ten field. Not that Darius Gilbert did this, but he's associated with it closely enough to get charged for something very much like this, and that's enough to get a very active Bowling Green three more points in the Fulmer Cup.

TEMPLE: Temple linebacker Praise Martin-Oguike is accused of sexually assaulting a fellow Temple student, and then allegedly texting her afterward to ask "Are you gonna press charges?" There really aren't enough ellipses or qualifiers for us to calculate how creepy and bad this sounds, so let's just say that a bare minimum the list of "aggravated assault, forcible rape, sexual assault, unlawful restraint and false imprisonment among other charges" gets Temple a conservative tally of fifteen points.