DON'T WORRY SOMEONE'S COUNTING FOR YOU. In case you weren't clear on the concept, someone is totally thinking about you, UTEP. Not the team you want thinking bad thoughts about you, but still: it's nice someone cares, even in the most malevolent of ways. 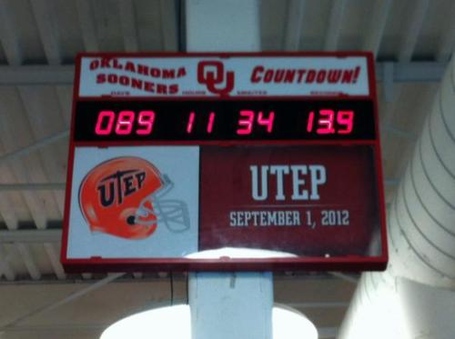 DON'T EVEN TRY IT. The Senator is right: if the ESPN Big Ten bloggertariat wants to do this, it's not even a starter to begin with Chick-Fil-A, and worse to build a defense on anything Jim Delany's said, ever, about anything. Like this weak shit:

Some in the South also took thinly veiled shots at Delany.

No, no, no. People like us called Jim Delany and the presidents of the Big Ten the petrified chunk of food blocking the alimentary canal of college football, or if you like the spiny, calcified kidney stones stuck painfully in the uretha of college football's glorious pee-hose. [/takes huge bite of Chick-Fil-A sandwich you probably have to drive 200 miles to get.]

LEGALISH. Bobby Big Wheel on the mothership explains the delicious particulars of tortious interference, while Black Shoe Diaries runs through everything you could possibly want to know about the beginning of the Sandusky trial tomorrow. Hey, Auburn, it's cool! It's legal over here in Georgia for the next nine months!

AARON MURRAY MIGHT NEED THEM TO BLOCK THIS FALL. A UGA quarterback with a certain amount of personal flair is a difficult and strange thing to process.

THE BLACK WORKS, ACTUALLY. Given his past record of motivational tactics, John L. Smith will likely accompany the black Arkansas jerseys by wearing a Batman mask. This is acceptable as long as Bane-Saban rips it off and breaks his back at halftime. (Negative: takes John L. out of the game, and that may be something you don't want to happen as an opposing coach.)

BUTCH NEWS DONE BUTCHLY. Bill C. on Cincy this year, a team that feels like it could land anywhere from six wins to ten depending on the vicissitudes of Big East football.

TRANSFERRING: Jesse Scroggins of USC, stuck in the traffic jam of perfect, beautiful quarterbacks who just show up to the Trojans' doorstep with stylish knapsacks and flawless teeth, will transfer immediately.

SUNRISE, SUNSET. Florida State's got a superb rush defense, and that's great! Their rush offense sucks, however, and let's see who's right under them....ahh, that's us. :(

REALIGNMENT DOES MAKE YOU SMARTER. See, it worked for Boston College, and...well, maybe you don't want to use this as any kind of relevant data, especially if it has Boston College-like effects on your football program.

THESE THINGS ARE QUITE LIKE THESE THINGS. The analogy of Roger Sterling-as-Miami is devastatingly accurate, especially when you thrown in Roger's breezy opinions on race and homosexuality.

ETC: Space really is depressing as hell. It seems like bath salts and max deadlift day are made for each other. Bomani on Aquemini, and why growing up is overrated. Microsoft Office costs $200, but there are reasons, and most of them are cake-related. Virgil deserves to be lonely, dammit. Ernie Johnson's rage knows no limits. Tim Layden's Blood, Sweat, and Chalk remains fascinating reading if you haven't got around to it.