A REVIEW OF EACH CONFERENCE'S NEGOTIATION STYLE

Share All sharing options for: A REVIEW OF EACH CONFERENCE'S NEGOTIATION STYLE

Just to keep you up to date on the playoff situation and the various public posturing surrounding negotiations: the SEC would like a four team playoff with the four best teams regardless of conference championships, the Big 12 would like the same, the Pac-12 has now proposed everything from the plus-one to four-team playoff, while the Big Ten Presidents actually suggested keeping the status quo in a call today.

Jim Delany then clarified this by savaging the subjective current status quo, then suggesting the four best teams should be in, and then setting himself on fire in a rich and flammable mixture of contradictions and potent bullshit. He is the Big Ten commissioner, and also your college football Troll King.

To completely clarify the picture as it stands now, we have created this compact and easy-to-understand guide to the negotiating table of college football's unfolding playoff discussion. Use well, and don't try to read the Big East entries or your eyes will explode with the force of a dying WAC. 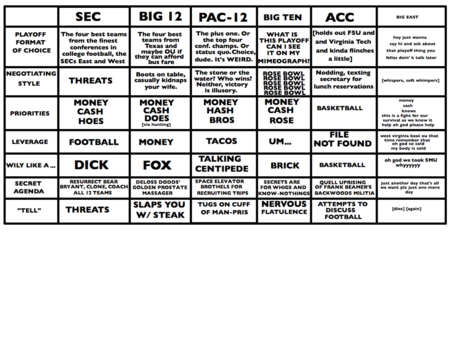 You may notice the SEC only has Bear clones coaching 12 teams. Mizzou hasn't earned it yet, and there ain't no way Auburn's ever gettin' one, ever.