A DISCUSSION ABOUT A CERTAIN UCONN SHIRT

Share All sharing options for: A DISCUSSION ABOUT A CERTAIN UCONN SHIRT 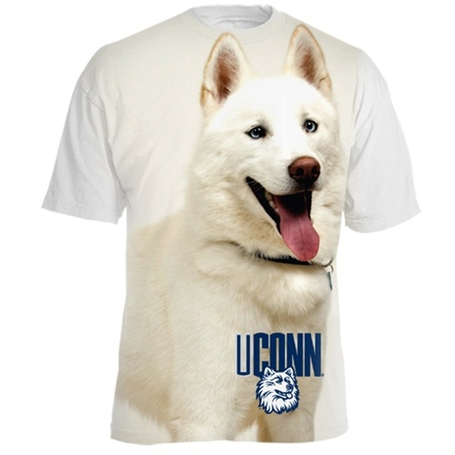 "No, I get it. It's internet humor. My mom loves keyboard scat."

"I think you mean 'keyboard cat.'"

"Do the eyes follow you? Because they're following me wherever I go."

"That's the January Jones of dogs."

"I'll take that as a compliment."

"Because it's got three expressions, and one of them is 'asleep, and also because the name of the dog made her puppies is a secret."

"That's...wait, does the husky come in colors besides white?"

"Not you care, Michael Bitch-ards, king of dog bigots. Is it awkward yelling out 'Adolf' at the dog park?"

"His name is Jonathan--"

"--after Jonathan Trumbull, the first governor of Connecticut."

"OHOHOHOHOHO SO IT IS. Does he have his own rowing machine on the sideline? If Ina Garten appears at games, does he pee himself to show submission?"

"The Husky is known for his tenacity, energy, athleticism, and his ability to travel long distances."

"Could it go 367 miles overnight? Because that's how far Randy Edsall went."

"Maybe they'll make a statue for him! He's the Balto of coaches!"

"I wear this shirt proudly."

"Except Balto carried medicine to make people not be sick. Randy Edsall's like the sled dog with cholera that stumbled into your town and then everyone died."

"I don't care who sees it. This shirt is beautiful."

"You play in the Big East. I don't think you need to worry about too many people seeing it."

"Just wait. Our TV contract is gonna be huge."

"If Racist Dog Lover Planet TV has anything to say about it, then sure."

"Says the guy with Nathan Bedford Forrest's dog on his shirt. Don't tell that dog Temple's on the schedule."

"Pardon me, we've got a conference to dominate."

"You're the first conference to ever book members based on NCIS ratings."

"I'm trying to make you tough."

"Your game against Maryland in week three, that's what. Wear that shirt to College Park and you'll hear way worse than what I've said."

"One, the existence of Maryland football fans in 2012."

"That they'll have enough players left on September 15th to field a team."