THEY DID SAY FIGHT, FARMERS, FIGHT. Is Texas A&M ready for the SEC? Does a T-Sip sip tea like a fancy frilly boy while schemin', plottin', and prolly a-polishin' a panky rang on a fancy porch while the farmers do all the dang work? YOU BET HE DOES, AND YOU BET THEY ARE.

HULLABALOO CONNECT CONNECT WITH SOMEONE'S JAW IN A BARFIGHT: 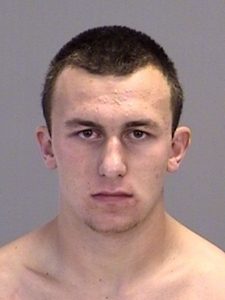 The shirtless mugshot for one of the Aggies' real contenders for starting quarterback might as well have been their entire resume for SEC membership, but now that it's here it might as well confirm Mike Slive's sound judgment in bringing them aboard. Points to be awarded later, shirt to be removed immediately in his honor. (They also got a Hyman, which is the only way you can break this news online on a sports blog, ever.)

MORE CROWELL. Suspended indefinitely for now, Isaiah Crowell's absence from the lineup for any period of time leaves Georgia with the usual array of kind of okay experienced guy plus three dudes who could probably be starters anywhere else if they could just stop doing UGA running back things.

STILL A BIT FAR FOR THIS STORYLINE. We're fully on board with saying Lane Kiffin is probably a really good coach at this point, but let's just pull these donkeys back from the cliff's edge a bit.

THIS IS KYLE FLOOD. One of these two men is the head coach at Rutgers. We're not sure which one, but study the face so you can recognize it on Thursday nights in the fall.

GOODBYE, HELLO. PittScript says goodbye, but will be merging happily with our Pitt blog, Cardiac Hill.

ETC. More Brian Phillips at Wimbledon, and a mental note is made to ask him about noodling. RUN YOU BASTARDS. Hey, request granted, Pizza Lord. Fred Davis, attorney-at-law. At McDonald's, there's no tipping! None at all! Tyler Bray, if he were a duck.