A BULLDOG FAN COMMENTS ON THE ARREST OF ISAIAH CROWELL

Share All sharing options for: A BULLDOG FAN COMMENTS ON THE ARREST OF ISAIAH CROWELL 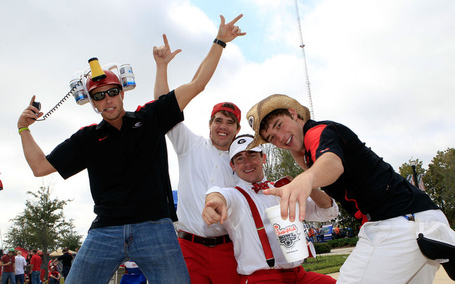 They set that traffic stop up in the school zone just so they could tag people for extra charges. That's entrapment. Like some kind of bullshit bonus round for criminal charges. SORRY, COPS, NO ONE TOLD ME I WAS IN THE DAILY DOUBLE ZONE.

Clarke County's just Grand Theft Auto for college students, except your only mission is to get drunk, and then you always get arrested and lose. Mudcat Elmore's car is the big unlockable vehicle. Get that, and you win the game and become Sheriff. Then you get to ride around poppin' kids for DUI and riding a scooter while being a football player.

God, this is the worst video game ever. Nevermind.

He had it under the seat, too. That's legally considered the glove compartment in Florida. Urban Meyer got that passed in the Florida Senature, or whatever. I don't even think they have a government. There's just an old Albertson's filled with guns and cocaine and key lime pies. Governor Pitbull just writes his orders on bitches' asses and lets the people read 'em. Then he goes to an underpass and eats someone's face off.

GATOR HATER 4 LYFE HOW YA LIKE THAT, URBAN CRIER?

It hurts to admit this, but...well, it's not like Crowell would have been able to run away from them, anyway.

Well, maybe he could have gotten away. If the chase happened during the fourth quarter, that is. Because he'd just disappear into thin air.

Dammit, Mark Richt's lost control of this team, hasn't he?

[books a quick 18 in the middle of the work day]