WE CLAIM THIS FOR SPAIN

Share All sharing options for: WE CLAIM THIS FOR SPAIN 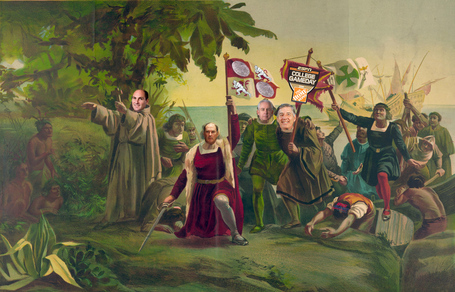 "Yes. But slightly less dumb than before."

"Are we going to kill people?"

"Shall we kill all of them?"

"No. We will pay off some and take their gold and silver, and let them live as a shadow of what they used to be."

"Which was something slightly more stupid."

"Which was something slightly more stupid."

"And disease? What of pestilence?"

"These people already have ESPN. They're already exposed to filth we can't possibly imagine."

"What of the nobles?"

"They shall be named. And they shall choose the elected."

"Who shall they be, these choosers?"

"Incompetent, biased, petty, short-sighted, and married to preconceived notions that the fiercest of logics cannot from them a divorce make."

"No, these people might have money, and possibly threw a foot-ball once."

"Set fire to the ships, Lieutenant."

"But the Belk Bowl and Beef O'Brady's Bowl, sir. They are still inside."

"Oh, well, then a cannonade for them immediately."

"Sir! There's a teeming antpile in this dried up well filled with sleeping bats!"

"And crabs! There's just crabs all over the place. Big, pinchy ones! "

"Splendid. I dub it: 'The Orange Bowl' Glasses, gentlemen."

[They toast, and survey their new empire]

"Pardon, sir. And the natives who will perform this labor for us? Shall they be...paid?"

[and then peals of laughter]

"Praise motherfuckin' be, Father. Had me sweating for a minute."

"Well, fair's fair. We get an empire, and in exchange must bear the burden of a disease."

"It's not nice to talk about Skip Bayless that way, sir."

"It's the nicest thing anyone will ever say about him, Father."