This week's Fulmer Cupdate is brought to you by Boardmaster Brian. If your cellphone works better today than it usually does, thank him for letting major telecom companies use his penis as an antenna on select weekdays. When Reggie Nelson's babymaker is finally rented for similar duties, AT&T's service will finally be considered something close to "not horrible." Enjoy. 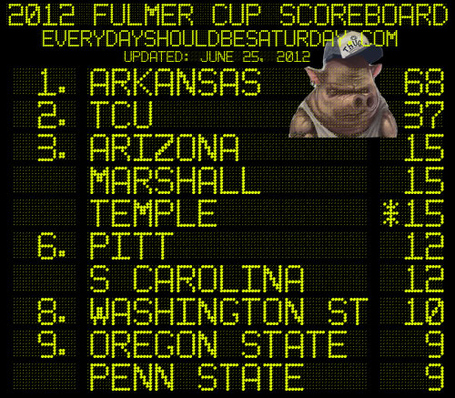 AUBURN. Backup quarterback Zeke Pike was arrested for public intox just after midnight on Sunday in Auburn, leading one to so many questions at once. How does one get arrested for public intoxication in Auburn, a town that's three blocks long and all but designed to fumble tipsy students back to campus? (Things roll uphill in Auburn: drunk students, Gene Chizik's career, etc.) Furthermore, how the hell does a football player get arrested for public intox in a a town that doubles as a tax dodge for skullduggerous logging magnates and football factory? And why on earth did the energetic Lee County prosecutors not add a public insurrection and treason charge to Pike's tally? When will we rally to the challenge posed by so-called "Americans" restricting the rights of those who wish to trod tipsily upon this fine land of ours as they like? WHEN, WE ASK?

There are no answers to these questions, but we do have one lonely point for the defending Fulmer Cup Champs. Barring a Ponzi scheme orchestrated by players working a boiler room set up in the Auburn football facilities, this appears to be twilight of the Tigers' reign as Fulmer Cup title holders. (This scenario? Entirely possible, especially if Trooper Taylor is waving a towel and talking to a nervous, gullible doctor over the PA.)

HAWAI'I. Alema Tachibana, arrested for DUI the second time in three months. We'd never drive drunk on an island, because there's always the possibility we're just going to floor it with the windows up, fall asleep at the wheel, and wake up driving on the shores of Australia. That's how the first settlers got there, after all, all seven of them in a waterlogged but still-running Nash Rambler. AC/DC doesn't remember any of it, but that's exactly how it all started, and don't bother searching this on Wikipedia it's full of internet lies.

Three points for a repeat offender charge and a DUI for the Warriors.

SOUTH CAROLINA. Not currently on the team, so former OL Kenny Davis' sexual assault charges do not count.