CONGRATULATIONS, BUTCH JONES, ON YOUR NBA TITLE. It was difficult, and not the prettiest or easiest run through the NBA playoffs, but let's all send our best wishes to Miami Heat point guard Butch Jones on his big win last night. 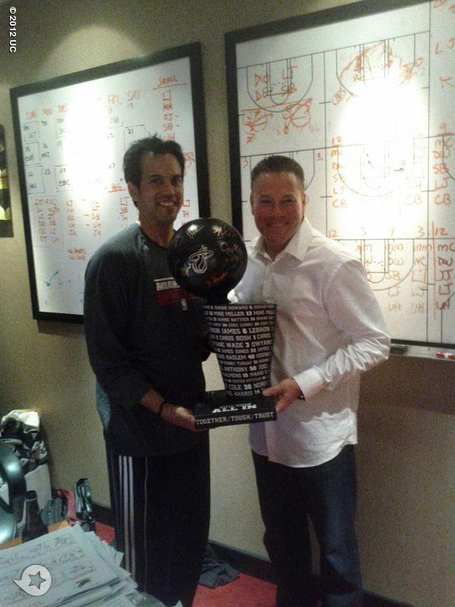 This will do little to change the perception of the Big East as a basketball conference, but that pipeline to South Florida needs tapping, and what better way to do it than by being an integral piece of Miami's second NBA title. Now let's just see LeBron try to win a title without him.

DENNIS FRANCHIONE PROBABLY SOLD THE GAME ON THE SIDE. Texas Tech pitched a fit over their game with Texas State potentially getting picked up by the Longhorn Network, and this should lead you right back to remembering that the Big 12 is basically Steely Dan or MGMT: two dudes, and then a lot of session players they can boot off the payroll whenever they like.

The dispute is not shocking given the high degree of dysfunction in the Big 12 re: the LHN. Texas Tech playing a home-and-home with Texas State, however, is amazing and terrifying, but Texas Tech deserves everything it has coming and more. (Not you, fans, but the shitheels running the school's athletics into the dusty soil of West Texas. Unfortunately, you have to take the ride with them.)

MARYLAND FOOTBALL KEEPS DOING THINGS. JUST, YOU KNOW, "THINGS." They're just test swatches, you tell yourself. Just test swatches. (Shit, when did we start using the word "swatches" unironically? Adulthood, man.) The best sentence we will read all day:

Like most great writing, this articulates something we've always wanted, but never had the right words to say. We do want to watch ACC football in a parking lot, and always have.

STAY POSITIVE, CRAIG. Craig James says he didn't realize how many people liked him as a broadcaster until he went into politics, and if that number is greater than zero, then yes, Craig, you are technically correct. There are ten people or so attending the Jerry Sandusky trial in support of the alleged child molester, so remember that someone always likes someone no matter what.

WE WARNED YOU THIS WOULD GET OUT OF HAND. Billboard casualties mount in the SEC.

LIGHTEN UP HEY IT'S FRIDAY! We kid, here's more depressing shit about CTE from Eleven Warriors.

ETC. That man clearly has no future as a paratrooper. Sharp on the Heat from Miami, which is real good and you should read it. CARY GRANT POCKET DOG. PJ O'Rourke's best was "Seoul Brothers," but this will have to do from the period when he was very funny, and very much in the right place.