GEORGE PLIMPTON SAYS LIFE IS TOO SHORT FOR ATARI LIVING

Share All sharing options for: GEORGE PLIMPTON SAYS LIFE IS TOO SHORT FOR ATARI LIVING

For a long time in America, if you needed to rub some smart dust on a product or a show, you called an agent on a rotary phone, then wrote a check, and then had George Plimpton stand next to it to beaming shining rays of haughty but personable intellectual sunshine. In a weak moment, you might be tempted to say that he was the Malcolm Gladwell of his time, and that would be an utter disaster. Malcolm Gladwell could not hold one of George Plimpton's brain-testes in his intellectual jockstrap, much less the whole pair. Let's not say anything like this ever again. 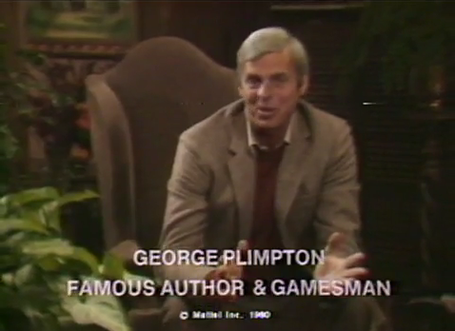 Any boring white guy can be a famous author. That's easy, because there are manuals for it and shit. Southern? Let me tell you about the bastard that was my daddy, or that time I had to live somewhere else for six months. Midwestern? All of us are crying behind closed doors and not talking about feelings and um hey look it's a dead city. Just want to be rich? A. You're actually part of a secret club, normal person, and not at all mediocre! B. A kind of blank template of a woman is in love with two different men WHO BOTH WANT HER! OMG!!! And it's magical or in the past or something.

No, this son of a bitch is a famous author and A GAMESMAN. At this instant, a Polo game is rushing toward him. A single unmanned horse will see him, recognize the complex touch of a Harvard man, yes, but a Harvard man who understands the animal soul, and whose blue-blooded veins turn an oxygenated vermillion when mixed with the fresh air of the open, wild, classless world.

Plimpton mounts his steed and rides away, at one with sport and the world: raconteur, writer, master of the celebrity cameo, gadfly, and more than anything, the world's most boss-ass video game street pusher. 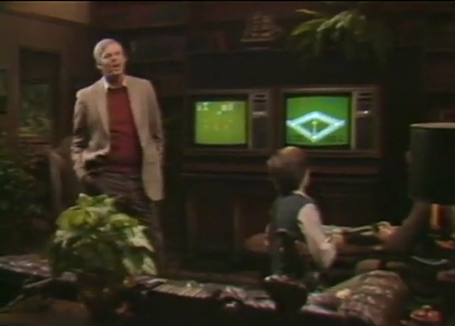 The children in the living room, however, are trampled to death by the polo mob, but no story was ever writ without a few sad pages ending up in the dustbin.

Please note that George Plimpton has two televisions. Translating this to 2012, this is the equivalent of plating colon with tiny flatscreens after every single surface of your house has been covered in beautiful HD displays. The leather lets you know he is rich, the sailboat lets you know he is actually a 1200 foot tall giant. The potted plants all but tell you that George Plimpton releases wild game into his home in order to hunt them with knives in a realistic but well-decorated jungle scene. He does this al fresco, just as he learned from the Yanomamo, and often in tandem with a very intoxicated Norman Mailer.

They only lost one servant in fifteen years of doing this, and that was from Rip Torn mistaking her for a nude Mailer. (Plimpton's servants were not unattractive, it's just that Rip Torn was extremely drunk, and like a nearsighted rhino attacks things indiscriminately.)

George Plimpton is so rich, and so deeply unconcerned with the obvious superiority of Intellivision, he'll even let children play them just so he can devote his expensive WASP Deadpool self to making his case to America. That's how little he cares, probably because he has a third television, one of the cabinet models with a wet bar built into the side.* If this video game-enslaved child had a chance to tell his classmates of a place with two televisions, they would stab him to death from sheer envy, but horses are riding toward the set at this instant, and will kill him before he meets a pointier fate. 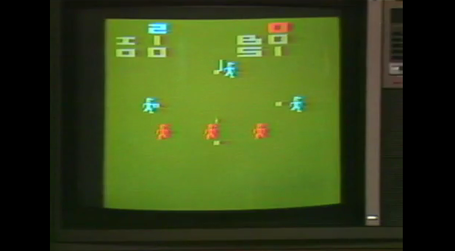 He's right. This game is utter crap. George Plimpton knows baseball, not because he's just a fan, but because as a practitioner of participatory journalism he's embarrassed himself at pretty much all of them, and then wrote about it. He let Wayne Walker and Alex Karras hit him for fun in full-contact drills with the Detroit Lions at the age of 36. From bitter personal experience, we can say that the only proper physical reaction to an experience like this is to shatter into a thousand pieces of frozen human tears, and evaporate forever to obliterate the memory. 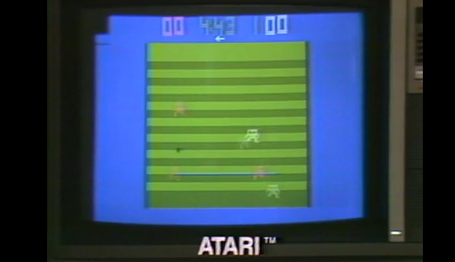 George Plimpton won't even bother to say it. He's got shit to do: getting shot in a John Wayne movie, editing The Paris Review while hosting Mousterpiece Theatre, taking shots in the face from Jack Dempsey. Plimpton doesn't have to say that Poltergeist Football remains the most terrifying video game experience of the dismal Atari catalog, or that the flickering ghosts were the clear inspiration for Ted Roof's defensive playbook.

He's got duties as the unofficial fireworks baron of New York City to tend to; you use your own eyes to tell what a misbegotten piece of owl shit this game is, reader. George Plimpton trusts you like that. 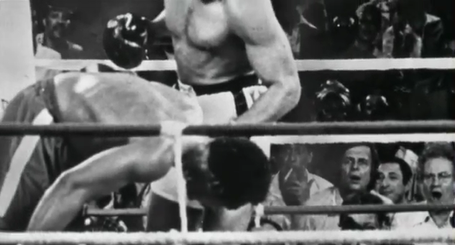 You see that? That's Plimpton and Mailer at the "Rumble in the Jungle," aka Foreman/Ali, and that is not the face of some stiff, bitter hack. That is someone so completely taken by the moment he will later write convincingly about being taken by the moment, that moment, when an overmatched Ali finally KOs Foreman after tiring him to death, a victory incomprehensible after weeks of measuring the holes Foreman left in heavy bags after training sessions.

This is the last paragraph of that piece.

Kinshasa is a city symbolically appropriate to the fall and shifts of dominance and power. Everywhere, usually at the end of a broad avenue, or in front of a government building, are great bare stone pedestals, now flat on top, with weeds growing in the cracks, on which once stood the imposing statues of Belgian colonial rule. On the promontory above the stretch of the Zaïre which is still called Stanley's Pool, the famous statue of the explorer himself once stood, peering up the river under the palm of one hand like an Indian chief. It too has been pulled down and lies in a giant shed near the National Museum in a jumble of cast-iron horses and kings. The roof of the shed is tin. On the dawn of the day the heavyweight crown shifted hands, the sound of the rain on the roof must have been deafening.

So, if you're compiling a list of all the awesome/insane/fantastic things about this video*, add in this: behind the scenes, George Plimpton is taking notes, hanging out, and probably getting drunk with Don King and explaining why his friend Norman is hitting on a ficus plant in the corner. (If only someone had put the whole thing on Youtube for you to kill the rest of the afternoon with. Hmmm, if only.)

*Short list: Mobutu Sese Seko's hat, baskets full of snack-bugs, the Spinners dancing, Don King, the JBs, the bass line, the drum part, soldiers marching in time to "Doin' It To Death," Ali shadow-boxing the camera, the light of the setting sun at the end, the woman ripping her top off at 2:30, Miriam Makeba, the Spinners dancing, no really just look at them, the big fatass reel-to-reel tape recorders, the trombone solo, JB's bodysuit. 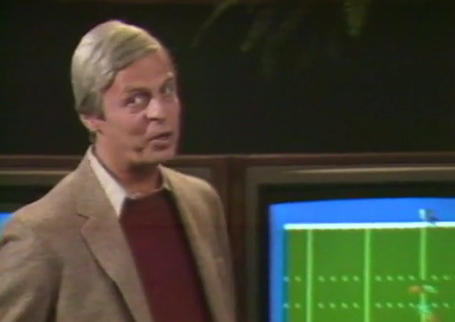 If you will excuse him, he has a horse to catch. Child. You, there, child. Please put down the excellent Intellivision controller, hard though that may be, and move if you want to live. "The ponies have soft noses and hard hooves," he would say in an unreal voice from a long-forgotten world. Then, as always, it was off to the games.