*We were born in Nashville no you hush, stupid factual person.

The coming College Football Four-Team Tiny Playoff Thing will likely have a selection committee. Ho, boy, do I have some ideas about the people who should be on that committee! We bet you do, and just like your foolproof playoff solution, it will be ignored completely in favor of something totally different and inferior to what you had in mind.

In this case, we're certain that no matter how many people are put on the selection committee, the members will generate outrage and discussion, because [IDEA THAT WASN'T MINE] and [THAT GUY'S DEAD NO REALLY YOU JUST PUT A DEAD GUY ON THE COMMITTEE I KNOW HE SHOWED UP BUT STILL.]

In fact, the first committee, once announced, may seem like the worst collection of people possible for the job. This is for two reasons. The first will be because Bobby Bowden will be on it, and even FSU fans have to acknowledge what a horrendous idea what would be. The second will be because you have not deliberately tried to assemble a worse group of people.

We have. We've even made a system out of it. 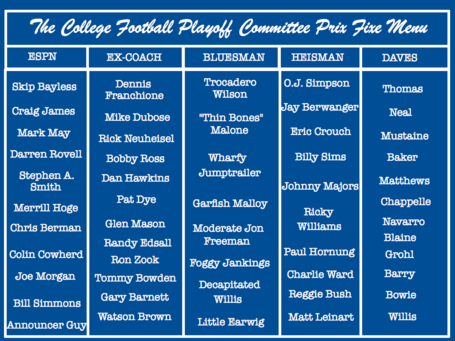 The Prix Fixe asks you to simply choose one item from each column, and then move to the next. When complete, you will have a legitimately horrible college football playoff committee to pitch, one far worse than any reality can possibly come up with on its own.

ESPN: We bent the rules a bit to include a few people who have moved on or retired. Our personal choice here was Cowherd, actually, since he sort of knows college football, and would also likely be beaten into a coma by his fellow committee members. Announcer Guy was our second because he, too, may also be beaten senseless the minute he opens his mouth.

EX-COACH: Franchione and Edsall are coaching? Oh, girl, you so crazy HUSH. Our choice here is Pat Dye. He'll drink with you, and will have the good sense to take a bribe for a vote when the time comes. Will not give you static about not wearing pants to the meeting, either.

BLUESMAN: Going with Moderate Jon Freeman, who like all ancient blues singers will laugh, say something in an incoherently thick accent, and likely die halfway through the meetings.

HEISMAN: For festivity, we'll have to go with Ricky Williams, though if you're determined to keep Brandeis out of the title game forever, Charlie Ward's your man.

DAVE: Grohl. For the rockface alone.