HOW HAS THIS HORROR BEEN AROUND FOR A MONTH WITHOUT OUR NOTICE. Auburn coaches and athletic department personnel have been infected with a flatworm that weaves a protective shell of garish button-down shirts. Please be advised. 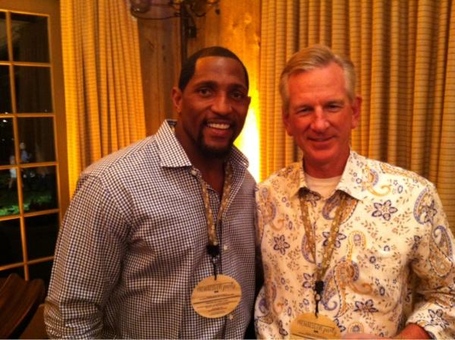 This is aged news, but we understand the delay. LIke all successful invasions, we won't notice it until it's too late, and shit this shirt we're wearing just turned into a star paisley nightmare we're infected shiiiiiit---

I...JUST... Will the last person at Penn State please close the Stargate. Please. There is also a Russian mob trial going on simultaneously, so just stay the hell away from the courthouse today. (Advice that should have been given less specifically to both Antonio Goodwin and to Ryan Leaf, and really sound advice all around.)

BOISE REMAINS A MYSTERY BEYOND OUR COMPREHENSION. Boise confounds all attempts at analysis even when you look at their recruiting budget, but since it's hard to quantify "potato-fueled sorcery machinery," that would make sense. Tennessee continues to have the biggest recruiting budget in the nation, something that surely won't be mentioned in conjunction with Derek Dooley's dismal record on the field by Clay Travis. (Nope.) (Not at all.) (Surely you jest.)

SWAGGER OVERLORD MILES APPROVES. Les Miles doesn't need words like swagger to validate his, um, swagger. He does clearly appreciate Steve Spurrier's ballsy approach to things, and should given that neither of them have worn a seatbelt in years. The difference: Spurrier does it in cars, while Miles does it in a ultralight he flies to work each morning nude.

BIGGER IS BETTER EXCEPT IN THOSE CLEARLY DOCUMENTED CASES WHERE IT ISN'T. The history of megaconferences is a dismal one on the whole, but sure let's do it anyway.

TERRY HOEPPNER LIVES ON. Crimson Quarry remembers a builder of a coach taken well before his time.

ETC. Jimmy Johnson fishes every day. Just sayin'. Hey, there's a degree of vigorous gayness we like in Iowa, and that, sir, is simply TOO gay. This is important, and don't ask why it just is.