As Eleven Warriors pointed out yesterday, state seals are perverse and strange things. Naturally, we wondered how relevant the chosen symbol of an entire body of people would be to your particular football tribe, and our results were...stupid, just immensely stupid, but sometimes somewhat insightful. (See: Louisiana.)

We took the preseason top ten and analyzed the home state seals of each, and found that state decisions about symbolic art are terrifying and sometimes involve birds puking out ribbons full of Latin. 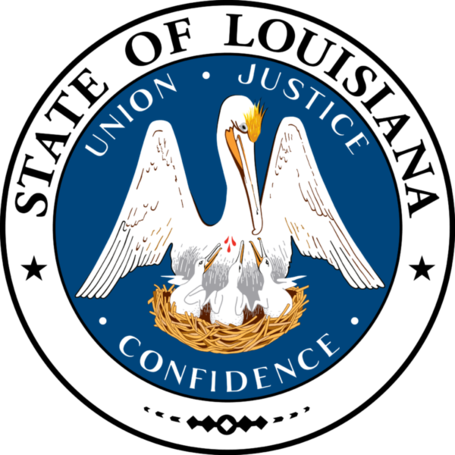 WHAT THIS SAYS ABOUT YOUR FOOTBALL TEAM: LSU as the giant football bird, and UL-Lafayette, UL-Monroe, and Louisiana Tech squabbling over the scraps? Shockingly accurate. Tulane, not pictured, fell out of the nest long ago and is fending off predators hopelessly at the foot of the tree. 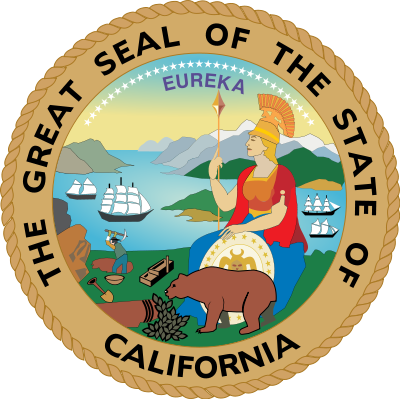 The finest state seal in the land, the Californian emblem encompasses all you know and love about the most American of states. A bear eats marijuana peacefully at the feet of a giant bodiced goddess with a spear. Below, a hopeless miner digs a pit for his own grave, awaiting death by spear at the giantess' hands. Piles of drugs float in the ocean behind them: green, freshly ground medical marijuana, huge mounds of grayish methamphetamine, and behind it the sublime white peaks of pure, uncut cocaine. In the back, tiny ships full of demented libertarians flee the cruel spear of the Blood Yoga Queen. (You may be looking for Bakersfield. She is sitting on it.)

WHAT THIS SAYS ABOUT YOUR FOOTBALL TEAM: A Trojan with a skirt on is lording over your state, and the Bears are too high to care, and poor Fresno State is probably at the bottom of that hole. 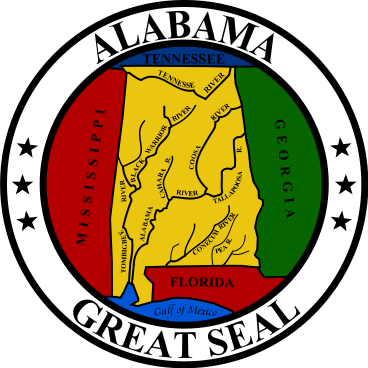 "SHIIIIT. Okay, just crop an open source map or something."

"Okay. What does Alabama have?"

"Football? We can't use that. This map says they have...um...rivers. Small, unremarkable rivers."

"And make sure the state colors make it look like an Pan-Africa medallion.

"THAT'S WHY THEY PAY YOU THE BIG BUCKS, BOSS."

WHAT THIS SAYS ABOUT YOUR FOOTBALL TEAM: That Alabama football is so big to the state that resources for even a basic clip art license cannot be diverted from recruiting budgets. 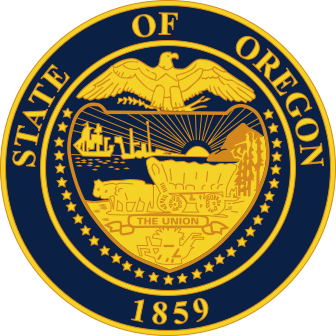 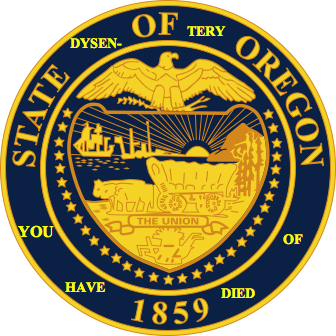 WHAT THIS SAYS ABOUT YOUR FOOTBALL TEAM: Well, dysentery is the hurry-up, no-huddle offense of gastrointestinal diseases, so it works a lot better than one might think. 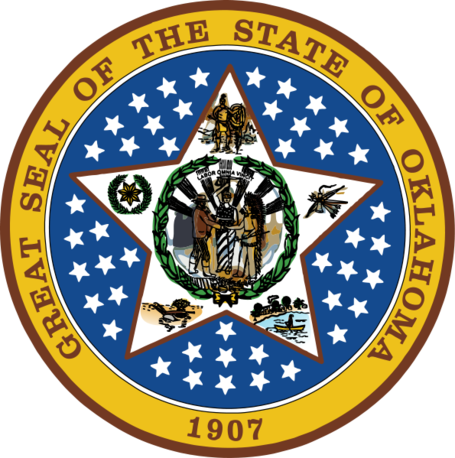 The stars represent Landry Jones average pass attempts per game. in 2011 Don't bother counting: there are over a million on them. They also represent the number of muscle fibers torn by OU running backs in the past year and a half. The latin "Labor Omnia Vincit" means "Don't ever play a game of 'cholera-hand' with a filthy white man."

WHAT THIS SAYS ABOUT YOUR FOOTBALL TEAM: That the Oklahoma state seal anticipated the experiment of hiring Willie Martinez to coach your secondary by over a hundred years. The filthy diseased white guy is Martinez, the Indian is your pass coverage, and the rest was the Baylor game last year (and the rest of them.) For OK State fans, um...just put T. Boone Pickens sitting in an eco-friendly hot tub on the back in your imaginations or something. 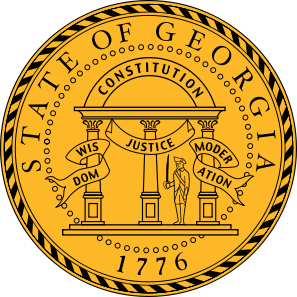 Troubled though she may be, never doubt this Southern original's dedication to its core values of "Dom, Wis, Justice, Moder, and Ation," also known as the five original members of Kraftwerk. There is also a man in the capital with a sword. He will kill you. You may not want to go to the capital any time soon, or ever. (P.S. He is the governor.)

WHAT THIS SAYS ABOUT YOUR FOOTBALL TEAM. If you're a Georgia Tech fan, just nod silently and know that the ANAK society surely had something to do with the state seal bearing one of the colors of your alma mater. If you're a Georgia fan, um, this is probably what you see above the judge's shoulder in the courtroom when you're arrested for the inevitable public urination charge in Athens. 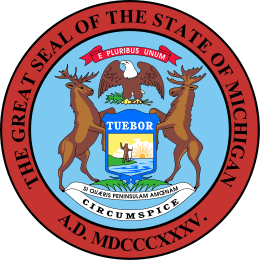 Nothing you wouldn't expect from the Mitten: a distant sunrise scene of the state's founder, Sasquatch*, held up by two stags without opposable thumbs. The implication is that the state of Michigan fantasizes about being the Lucky Pierre between two ten point bucks. If that's what you need, Michigan, we're not judging. (Neither would the spirit of your furry, misunderstood, and very shy founder.)

*Or Brian Cook. They're hard to tell apart, and similar in habits.

WHAT THIS SAYS ABOUT YOUR FOOTBALL TEAM: We have no goddamn clue. It's two deer about to mount a vintage TUEBOR BEER clock with Sasquatch on it. You figure that shit out, demented peninsulars**.

**It's supposed to be an elk and a moose, and Tuebor means "I will defend." We'll write that here before someone actually and really assumes we didn't look this up. 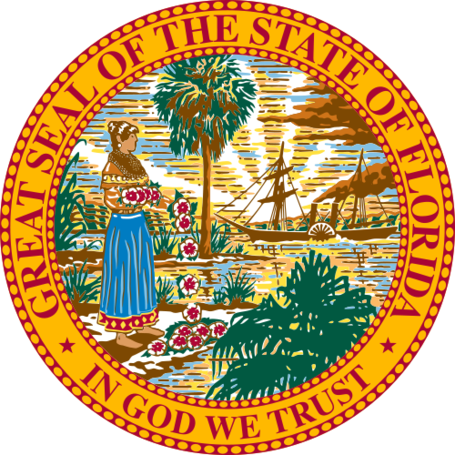 WHAT THIS SAYS ABOUT YOUR FOOTBALL TEAM: Considering the entire state's history is built on the oversale of worthless commodities, it's perfect for Florida State. Florida may be seen rotting beneath a palmetto in the foreground, and Miami is somewhere bound and shackled in the bridge of the ship in the background. 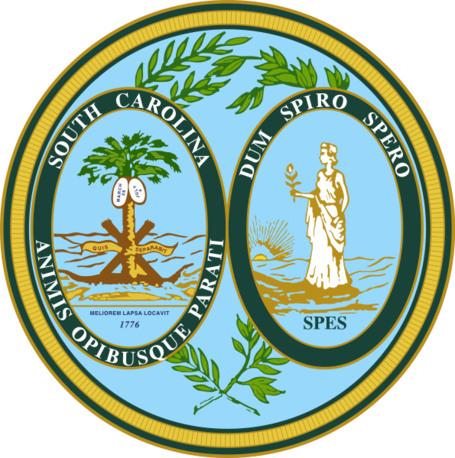 How many testicles can one work into a single state seal? In South Carolina, even the palm trees have balls on them, balls with words on 'em. The one on the left reads "I Like to Fart": the one on the right reads "Avoid The Noid." The original meanings were lost to history, but some suspect they originated somewhere in the Myrtle Beach area due to the common use of both phrases on t-shirts there in 1987, the year of the state's founding. ("Big Johnson" also has some unclear role in the state's early history.)

WHAT THIS MEANS FOR YOUR FOOTBALL TEAM: Steve Spurrier is your coach, so balls do make sense here. As far as Clemson goes, "Dum Spiro Spero" means "While I Breathe, I Hope," something equally applicable to Clemson and South Carolina fans at different stretches in their existence. [gurrr the dum part referz to Dabo BEAT YOU TO IT, COLONEL OBVIOUS.] 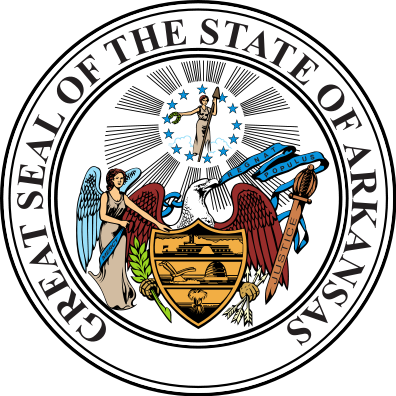 "When justice reigns, it will have titties, and will also be playing horseshoes with an eagle whose super power is holding too many weapons and puking latin phrases on ribbon."

WHAT THIS SAYS ABOUT YOUR FOOTBALL TEAM: We have no idea, though if you have a state with a riverboat on its state seal, it's a solid bet that Houston Nutt will end up coaching your football team because Houston Nutt is, an undead riverboat casino faro dealer from the 1850s.