FULMER CUPDATE: ALL QUIET SAVE FOR ONE TIPSY JACKET

Share All sharing options for: FULMER CUPDATE: ALL QUIET SAVE FOR ONE TIPSY JACKET

Boardmaster Brian brings us the board this week from Euro 2012, where his penis is being used as a landbridge by Russian hooligans running into Poland and Ukraine for games. Reggie Nelson's was rejected because of horrible racism, but also because space-maidens of astonishing size requiring love. Enjoy. 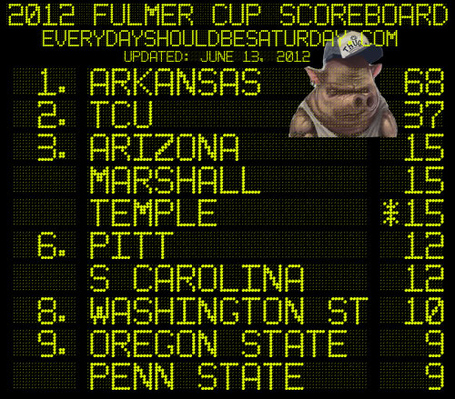 GEORGIA TECH. You know it's a weird week when Georgia Tech stands alone in the update column, both because Georgia Tech historically has been a spotty Fulmer Cup performer, and also because all things Georgia Tech are even in the most positive of lights. We hold a degree from Tech, and know directly of this innate strangeness.

So it is only consistent with Tech's general weirdness that their solo spot in the Fulmer Cup should take place not on North Avenue, but in hated rival Georgia's hometown of Athens. Corey Alford, linebacker primarily used on special teams last year, earned charges of public intox, disorderly conduct, and the requisite "hindering law enforcement officers" for both an altercation at the Boar's Head early Saturday. We remind you: don't ever barfight, and when you do don't fight the inevitable cuffing because district attorneys love to use their degrees and those tiny little charges everyone forgets in the heat of the moment. *

*If you do barfight, make sure it's in a saloon, and that you only barfight in a saloon with a jukebox at the end of the long, slippery bar. Throwing a man down the bar without starting a festive musical number is living poorly.

That's three points for the weirdass Georgia Tech Yellow Jackets in the 2012 Fulmer Cup, and a reminder that Paul Johnson's teams remain feisty in road games of all sorts in Athens.