THINGS ONE COULD LEARN FROM INTERNATIONAL SOCCER

Share All sharing options for: THINGS ONE COULD LEARN FROM INTERNATIONAL SOCCER

College football has a long tradition of stealing what works. (LIke our workforce's market value, for instance.) Michigan's helmets came from Princeton, Alabama's "Rammer Jammer" is just a reworked "Rock And Roll, Pt. 1," and Penn State borrowed "Zombie Nation" from the Devil, who was like "Heeeeeere, sing this song forever and while you're at it here's "Seven Nation Army, tooooooo." Let the Devil pick your cheerleaders, but never your music.

So if we're going to start borrowing things from international soccer--unlike the cursed "Seven Nation Army" chant--let's pick the good things. Road flares aren't nearly common enough in American football stands. Neither are brilliant taunting songs like "Are youuuu my daaaaaad" sung to the tune of "Sloop John B" to John Terry in the midst of a paternity scandal. One is really dangerous and impractical, especially given the volatile whiskey fumes coming off the stands in Baton Rouge and Morgantown; the other requires coordination and the will to sing, something Americans a.) don't do outside of work and b) are loath to do. 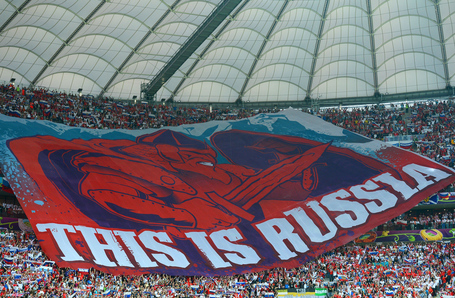 We could totally do this. It's just a big honking flag with some burly, roided up personification of your team's animal spirit on it. Weave it out of some edible corn product--get on that, much-ballyhooed Big Ten research institutions--and and then turn the entire process into a kind of sports communion where everyone literally devours a piece of their team before the game. Better still, just set it on fire to keep warm. (You didn't need hair or eyebrows, anyway.)

Doubt the brilliance of this idea until Phil Knight makes one that's just an enormous woven digital projection screen flashing highlights of an anthropomorphic duck killing CGI opponents in Itchy and Scratchyesque fashion. Better still, you'll want it for the first opponent's fanbase who misspells something on theirs. We mAke no predictions, assUmptions, Bets, or Unnecessary slandeR on the first team to make this happeN. That's your job, terrible person.*

*We kid. It'd be South Carolina.