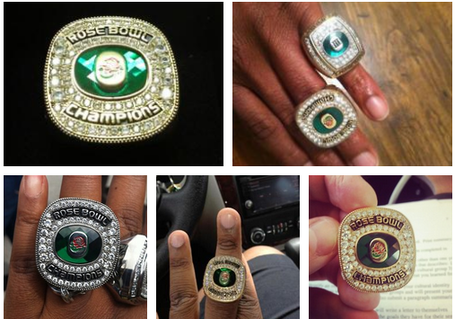 Win an only kind of consequential BCS bowl? Well you get a ring. Should the ring be gaudy? Shit son, we LIVE gaudy. In fact, in the spectrum of how jewelry goes and in relation to how Oregon usually carries themselves, this is the least gaudy case of gaudy being gaudy we've ever seen (Yo, Gotti).

SPEND MONEY LIKE WE PRINT MONEY While hardly B1G or SEC stacks, the Big XII finally has their fancy clothes and diamond rings (though obviously, non-Rose Bowl championship ones). TCU and West Virginia? Your moves are justified. There's a .00000001% either of your previous conferences could've ever come even in the ballpark of such a deal. As for the rest of them? Tide unto Bevo so as it is decreed.

SICK BYRNE, BRO Quasi-embattled (by Aggies of course) Aggie athletic director Bill Byrne is "retiring". Board of trustee members never cared for Byrne and coupled with his skepticism towards the school's SEC move, he should just generally consider himself lucky it didn't come to him finding a steer's head in his bed (that we know of).

In his tenure at Texas A&M, Byrne hired Dennis Franchione (lolol), Mike Sherman (LOLOL), Kevin Sumlin (incomplete), Billy Gillespie (yes, he built that program from the ground up, UK fans), Mark Turgeon (okay), and Billy Kennedy (TBD). He won 17 national championships in so-called non-money sports and left a more prestigious job at Nebraska to come to Aggieland, but alas wasn't willing to be a complete puppet for a core of ex-male cheerleaders and collie enthusiasts (hey, at least he wasn't a forward thinking Hispanic woman, amirite A&M board of trustees?!)

The leading candidate to be A&M's next athletic director is this plate of bacon. Greasy, delicious, no stranger to pork, and completely at the will of those frying it:

ELABORATE LONGHORN NETWORK REALITY PROGRAMMING IS ELABORATE Three Texas football players, Alex Okafor, Kenny Vacarro, and some other guy (okay, Barrett Matthews), were arrested early Monday morning for refusing to comply with an officer who was asking them to leave an establishment (purportedly outside a late night eatery). Vacarro took to twitter to explain that it was all a misunderstanding and inform those concerned that he would not be waiting in line for 3 am pizza ever again.

For those wondering, this is incredibly weak sauce as far as Fulmer Cup points go. Since it's at the sole discretion of fearless leader, I wouldn't dare speculate as to a point value, but if you're hoping to crucify the Longhorns, you better stir up (or unearth) something far more sinister than a few drunk bros getting impatient in line. Rumor has it suspensions could be afoot as well, but again, pretty lame train offenses in the first place; a game would even be pushing it.

ANYTHING CAN HAPPEN WHEN YOU SHARE A CELL, CUZ Creepy pedosuperfan Charles Eric Waugh is no longer at-large. The Irontown, OH B-Dubs will need a new ringer. /Blog justice 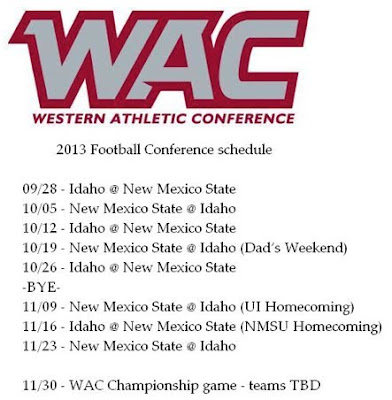 Could be a real banner year for Idaho.

I'LL ONLY COMMIT TO BE PRE-PRE ENGAGED As first mentioned here, BYU nearly joined the Big East, but the Big East didn't want to wait until marriage, which was a total deal breaker.