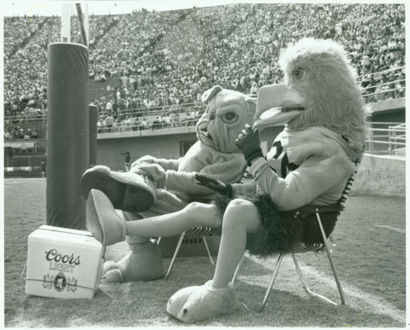 This was in a more casual time, when two mascots could simply relax pre-game, crack open a few cold ones, and get blind drunk before respectfully passing out in one endzone and spending the remainder of the game prone and dead to the world. Frankly, if we were Bully in the 1980s, we would have done this a LOT. (Via For Whom The Cowbell Tolls, which is still our finest SBN blog title ever.)

LET'S JUST MAKE THIS AS COMPLICATED AS POSSIBLE. We're this close to just calling Jim Delany "Scar." In redeeming B1G news, Jerry Kill exists and says fantastic things like this.

"Surround yourself with good people. ... My dad used to have the saying, 'You hang around with turds, you'll finish third.'"

PLAN IS 1.) SCREW IT 2.) TO HELL WITH EVERYONE 3.) THROW RED PEPPER IN EVERYONE'S EYES. Pre-Snap Read's correct: New Mexico State should just obliterate everything in front of them, play like there's a blade to the back of their neck, and raise double middle fingers to fate and see what happens.

BILL C ON TULSA. Remember, even if Tulsa doesn't find a suitable replacement for G.J. Kinne, they have the most attractive stone-paneled stands you will ever see. Is that us trying to sell your mother on Tulsa football? Is this already leading to a lewd "Golden Hurricane/Urolagnia" joke you'll wish you never thought about? You bet it is.

IN CREEPY NEWS. Land Grant Holy Land had a discussion with the police, and not for the usual reasons.

WATCH AS TULANE ATTEMPTS THE NEARLY IMPOSSIBLE FEAT OF "GETTING SOMETHING DONE IN NEW ORLEANS." Difficulty grade of building a new stadium for the Green Wave? 11 out of 10, basically, and rising by the day in degree of impossibility.

ETC: If you haven't seen this Paralympics ad, you should. The most beautiful face on radio is now a Gator. Yo, C-Tates, that's a sweet GQ profile we hadn't read until yesterday. This mannequin has a Beyonce, man! RIP, Floating Bear.