BALL SO HARD. Oh, Cowboys Ride for Free, there are moments when we envy having a megabooster who embraces his inner J.R. Ewing. Florida's boosters tend to be mere hundred-millionaires who prefer hiding behind gates and relative anonymity, and would never deign to sight up "The Kitten Whisperer aka The Harvester of Pauses aka The Taio Cruz of Hip Hop aka Young Garnier Fructis" on Twitter and annihilate him with a single shot. 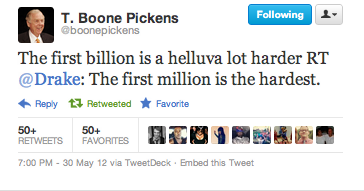 That's getting put in a wheelchair, even if Drake did admit T. Boone "stunted on him hard" after the fact. Busy getting on that difficult first million: OSU running back Herschel Sims, charged with stealing $700 from teammate Jeremiah Tshimanga.

PROJECT X. Not the movie about a house party that was CRAZEEE, or the Matthew Broderick movie about training chimps to fly planes, but the SEC's digital/television media project that sounds a lot like the Big Ten Network. So, looking at this photo, um...it's basically the thing where chimps are taught to fly planes. 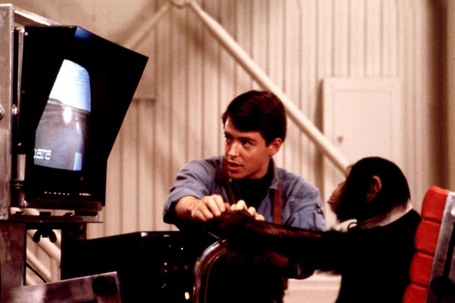 "Here, SEC Monkey. Here's why you shouldn't use shitty XOS media players, ever, for anything."

JAMES FRANKLIN IS GONNA NEED TO SEE YOUR WIFE. DON'T ASK WHY. James Franklin clearly wants you to know the art of seduction, and just basically said the Vanderbilt staff will have sex with your wives, SEC. Nick Saban says this is fine, just leave a box of oatmeal creme pies at the door and please stop bothering him with people talking emotion things.

CLEMSON AND VIRGINIA TECH ARE WONDERING WHAT YOU'RE DOING, REST OF ACC. Because all Frank Beamer does is hammer nails into things with his bare fists, drink kerosene to relax, and make money.

THIS MIGHT BE GOING TOO FAR. If anyone has the ability to digitally insert dollar bills drifting out of the back of this plane, please do. (Dollar bills, not hundreds. That's important here.)

PRESENTED WITHOUT COMMENT. He has an offer from BCC, and that's great!

BELT BUCKLE FTW. "I'm going to need a shirtless photo of you. No, it's for promotional purposes, trust me. It's 1981. Everyone takes all their formal portraits shirtless."

THERE MIGHT BE SOME COGNITIVE DISSONANCE HERE. If you're going to set black-and-white footage to modern-day hip-hop, then one should do the reverse and set highlight footage from 2012 to Old Western tack piano whorehouse music. In fact, please do this. What's really fun about this footage? 23 step drops in the passing game.

ETC. The USMNT got rolled by Brazil last night, but, um, Brazil. If you have to have a favorite special teams player in college football, let it be Virginia Tech's Wiley Brown, whose dad, go-go legend Chuck E. Brown, just passed away from "everything failure." (If you must go, that is the way to do it.) Chris Bosh looks great coming off the bench. Reading Fifty Shades of Grey so you don't have to. Clint Dempsey's bitchpleaseface from last night.