The board is brought to you as always by Brian, whose junk is being used as a data line this week for SEC media coverage in Destin. Reggie Nelson's was unavailable, as it is currently pleasing the entire nation of Canada. Enjoy. 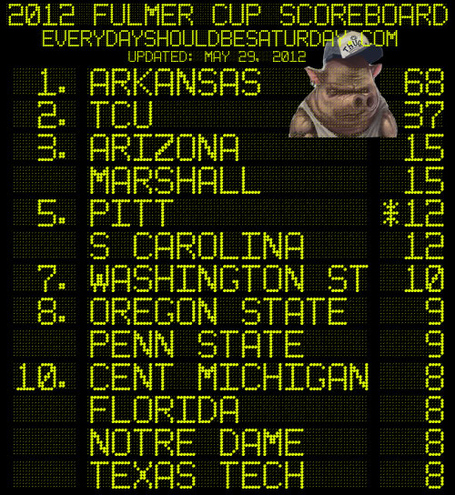 TENNESSEE. Cameron Clear, not an IT major, it seems. Caught using a stolen MacBook Pro by the IT department, Clear is charged with felony theft. To his credit he did not write "CAMERON CLEAR" on it in white-out, though he may still transfer and win a national title. Not that this has ever happened before, and GOVAWLS with a three point score for dumb theft.

MISSOURI. Mizzou is acclimating already to the SEC East, it seems, since leaving the scene of an accident is the kind of panicky, poor decision-making we expect from our fine conference's oft-confused quarterbacks. Corbin Berkstresser's felony charge for leaving the scene of an accident earns Mizzou three points in the Fulmer Cup, though we almost awarded a bonus point for "playing football with a lacrosse name."

OREGON STATE. The lively streets of Corvallis strike again in the form of a classic bouncer-punching, use of someone else's ID, and trespassing charges. Overall, that's five points: four for the combined charges, and one for the bonus of a refusal to stay out of the club even when it's banned by terms of your previous arrest. Dedication has to earn you something in this world (besides misdemeanor charges, that is.) Remember the rules for barfighting include "you always lose."

OKLAHOMA STATE. Cowboys offensive lineman Christian Littlehead was arrested for public intox, so that's one point for the Cowboys. A clarification: as cool a Native American name as "Littlehead" may be, it still pales in comparison with the very real Seminole moniker "MONDO TIGER."

MINNESOTA. Ra'Shede Hageman lost a barfight to no one, apparently and still managed to get arrested. That's one point for solo barfighting, and the mandatory comment about the poor Golden Gophers losing a fight to themselves even in the offseason.

FLORIDA. Leon Orr isn't a criminal, but he's definitely not a personal assistant or professional organizer. One point for driving on a suspended license adds with the Gator bonus for two points. you might just want to hang around the house for a while. Like, until you graduate, and definitely not driving anything other than a bike in a correct and lawful fashion on lightly traveled back roads to campus.

MIDDLE TENNESSEE STATE. We certainly do not endorse the random punching of people. (Specific punching is such a better service to society.) And though we have to give three points for MTSU's Dearco Nolan for breaking aspiring rapper Charles Williams' jaw at a party, we do have to give him credit for exposing a rapper lacking dedication to the game.

Williams, an aspiring rapper, told News Channel 5 he can’t perform since he had surgery on the jaw and it is wired shut to heal.

COME ON SON. You want the champagne, you take the champ's pains.

TULANE. You might think this is a tale of an innocent band kid turned bad by the evils of football, but then again you probably never bought horse tranquilizers sold as ecstasy off a tuba player, did you? Four points for Tulane, and don't smile at that piccolo player SHE IS PROBABLY THE MADAM OF AN UPSCALE WHOREHOUSE.

[SCHOOL TO BE NAMED LATER] Did you know that Purdue not only had a "leading receiver," but that he was arrested for suspicion of carrying a concealed weapon? Furthermore, did you even have an idea you couldn't just carry a gun on your hip in Florida at all times, and in fact use it to open doors if you felt "a reasonable amount of effort could be expended elsewhere doing something else other than getting winded opening this damned door?"

Florida's laws are based on laziness, mostly, which makes the paperwork of actually arresting someone seem really weird here. But whatever, take your two points for firearms-related business and go, school that doesn't exist.

AUBURN. It's like you're not even trying, Auburn. One point for Trovon Reed's failure to appear.