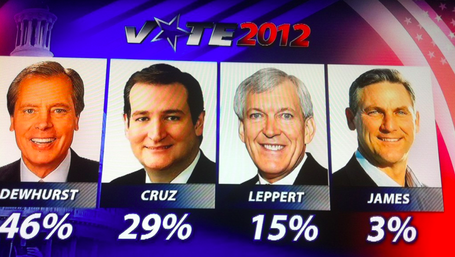 Let's all just work real hard today to ensure America gets it right and sends a man who knows about SLASHING deficits and CUTTING red tape like there's no tomorrow. Polls be damned, we hope Texas realizes we need someone who can put big government in a STRANGLEHOLD, RIP the power away from the fat cats of the Beltway, and then give the people of this great country the power to ATTACK the problems that BIND them to mediocrity, and TORTURE them from afar. Craig James isn't here to KILL hope; no, he's here to give it new life.

HELLO, COACH RHUBARB. John L. Smith is coaching in the SEC West this year, and you really, really haven't thought about how wondrous this is going to be for all of us except Arkansas fans. (And shit, for all we know it may be great for them, too, since John L. is just as capable of ripping off a national title run out of nowhere as he is of running this team into the ground.) Reader PunkOnDeck suggests this as the story of Johnelle's year of living dangerously, and Rhubarb does have a certain ring to it.

THE FOREVER WAR. In college football, it's always been about not staging a playoff, though at least back in the 1930s they just openly admitted wanting to play easier teams.

BEARKILLING IS SO HOT RIGHT NOW. It's just let's-everyone-gang-up-on-the-poor-face-eating-mankilling-bear-season, now isn't it? That pose does prompt the question: do you need assistance, sir? (NSFW via simulated manbearsex)

THE 6-1-1. The SEC's likely going to go 6-1-1 for conference play sequencing. As long as we keep our cross-divisional game with LSU, this is totally fine with us.

LIKE EVERYONE ELSE IN THE SOUTHEAST MIKE SLIVE IS IN SANDESTIN BITCHING ABOUT HIS TEE TIMES AND HOPING THE KIDS WILL JUST STAY ALL DAY AT THE POOL OR SOMETHING JESUS THIS PLACE-- Right over the line demarcating beautiful Walton County and Birmingham-By-The-Sea, the SEC will meet this week to discuss the playoffs college football has fought for a century, and possibly to wait in line for seven hours at the Back Porch before getting the same fried shit they serve everywhere on the Gulf Coast. THE BATSIGNAL IS OUT! ASSEMBLE THE THREE DAVES.

THERE MAY BE A WAY OUT OF THIS. If Memphis is going to try and block transfers to other places, then it's only fair to petition the NCAA asking if playing football at Memphis really even counts as using a year of eligibility on "football" anyway.

BEFORE IT GOES OVER THE HORIZON: Johnny's piece on Memorial Day is everything it should be, including really good.

ETC: Oooh, slo-mo fencing. Three Stacks as Jimi means he's not rapping with Big Boi, and thus we object. A tour of the SBN studios. Russia, humanity perfected. WU-TANG CLAMS AIN'T NOTHING TO FUCK WITH. Snooky's of Statesboro lives on, sort of. John Cleese is probably not coming to your funeral, and that is a shame. Your dog has never rappelled, and that makes you a terrible owner. Progressive Boink lives.