YOU'RE LOOKING LIVE AT A MUSBURGER GRADUATION

Share All sharing options for: YOU'RE LOOKING LIVE AT A MUSBURGER GRADUATION 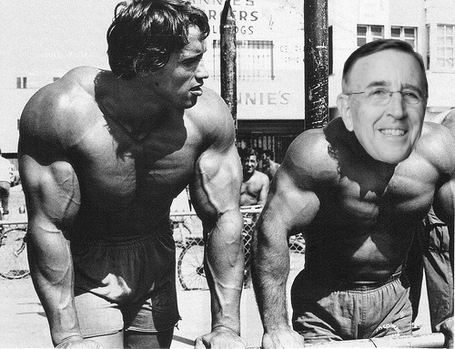 YOU'RE LOOKING LIVE. At your graduation.

[/puts finger to side of nose]

I'm happy to be here today in beautiful Columbus, Ohio. If you are not Columbus, Ohio, then you should be, because it is a great town. A lively town. I once won a live boy in an all-night pinochle match there. Jim Tressel hated to lose him, but he's been a fine stable boy for me for five years. Craig Krenzel, I owe you so much more than five years of back pay. i owe you gratitude.

Someday I'll get your family out of Haiti, Craig. I promise. I'm the one who sent them there, and I'll be the one who gets them back.

You're also looking live at the first day of the rest of your life. Just because the internet makes abandoning your family and starting over under an assumed alias unpopular doesn't mean it's not still a viable strategy, my friends.

Graduating class of 2007, the world is a changing place.

It used to be that a man could do almost anything. Drink a Moosehead beer and blow a few tolls on the Long Island Expressway. Slap a dealer at the Mohegan sun with your shoe. Make some big dreams while cruising on a yacht. Not your yacht, but one you borrowed for a few hours. You leave your keys in the ignition, and you're the one to blame. Sailor's rules.

It's a stricter world now, but I do still know a few things. I know that vodka is an odorless liquid. So is sulfuric acid. If you're a go-getter, you already know what I'm thinking. Only one man's figured out the difference. I hate you Jim Nantz, and always will.

You might think a lot of things right now. Some of them are true. If someone says you can't fix a Little League World Series game with a cooler full of Capri-Sun and $50, for instance. That might be true, and it might not, but there's a redone bathroom with combo bidet/kegerator that's all the answer you need.

I know that you should find one woman and stick with her. Share your dreams, you fears, your hopes, and custodianship in an offshore trust easily revertible to her name as sole title holder.

Stay faithful. Gamble with money, and you've only lost money. But gamble with your penis and you could lose your boat, and that's where your non-taxable speaking engagement money's kept in cash.

Not mine, mind you. But a friend of mine. A friend.

I also know good friends teach you good lessons. I'll never forget what Frank Gifford taught me at the ABC Christmas Party in 1988: 'The will to win is the most powerful force in human history. Much more powerful than the lock on any ladies room, I can assure you of that.'

Split sevens. Reagan did, even if he didn't remember it, and it killed the Soviet Union.

Keep a handkerchief. You never know when you'll have to clean up a liquid, or what that liquid is going to be. I recommend brown for greatest utility. If it works for Jack Arute's needs, believe me: it'll work for anyone.

Keep reading. I recently read 50 Shades Of Grey, and then set it on fire to read a Zane Grey novel by the flickering light it produced. It was as happy as I've been in years.

[goes back to speech]

Remember where you're from. In Montana you grow up sleeping beneath the stars. Most planetarium security guards will let you do the same for twenty bucks as long as you're out by nine a.m.

(Steadiest hands in the business no matter the situation, by the way, even if an Asian person was in the room. He was terrified of them. Thought they could read his mind after he ate Chinese food. I'm not saying he's right, but I'm certainly not saying he's wrong, either. Miss ya, Greek.)

Folks, in the game of life, there's only one winner. But don't worry, there's another race in 25 minutes and the beer cart attendee is a real looker.

Children are the ultimate gamble, so if you walk out of a department store up a few in the head count, just call it a win and take them home with you.

Don't be afraid to be you, unless you're a horrible person who's terrible at things. This may be you, and you may not even have realized until this very moment. You could be incompetent, and everyone could hate you, and you might not even know it. Be sure to be confident, too. Don't ever doubt yourself for a second.

If you run out of chips, most casinos of repute accept teeth as credit. They don't even have to be yours!

Success, for you, may be overrated. After all, success is 1% inspiration, and 99% perspiration. Bud Light is 4.2 percent alcohol, and 95.8% water. You decide which one is less disgusting to drink.

Pai Gow tables make you temporarily invisible to casino security personnel. Don't stay for more than ten hands, though, or you become an official citizen of Malaysia. If you think you're getting a dollar of my money, Kuala Lumpur, you can kiss both pasty cheeks of this man-saddle and have the grimy middle for dessert.

Failure can be the foundation of success, but bodies float, folks. Never forget that.

It's easy to become cynical, even in my field, when it seems our collective focus is narrowing to profit. I'm sorry, that's Pro-Fit, the new low calorie snack chip from Tostitos!" A complimentary bag of each is under your chair.

That'll be fifteen grand, in clean hundreds, in a paper bag. No receipts. We don't need to involve Irving R. Snatchcash in this transaction.

FOR MYSELF AND THE GOOD PEOPLE AT FRITO-LAY, SO LONG.