FOR IMMEDIATE RELEASE - PIRACY IS THE NUMBER ONE THREAT TO BEARS, HUMANITY

Share All sharing options for: FOR IMMEDIATE RELEASE - PIRACY IS THE NUMBER ONE THREAT TO BEARS, HUMANITY

For immediate release to Joe Schad. If you have questions, please contact Spaeth Communications at 214-871-8888, or reach us on the web.

REAL STREET, UNITED GREATS OF AMERICA (May 21, 2012) - Probable sociopath and current Washington State football coach Mike Leach demonstrated, yet again, his complete lack of character when he publicly admitted to the kidnapping and murder of an innocent, U.S.-born bear. Leach, who was named in a recent ConservativeJusticeKeepsFolksHonest PAC survey as the number one threat to the health and safety of our nation's children, has offered no apology or explanation for his crimes.

"I've never heard of anything as brutal as this. It makes some genocides look tame, frankly," said Official Forest Ranger Greg Flames. 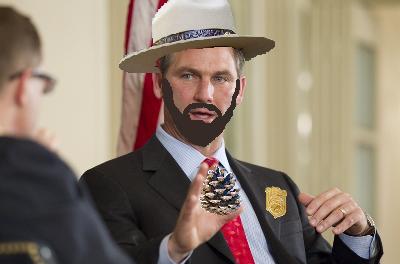 "Reggie - that was the bear's name - was here a couple of days a week with a youth group he led. They'd wander through the park, picking up trash and handing out sunscreen to hikers. Reggie always said ultraviolet rays were more dangerous than the meanest Kodiak."

Sources who wish to remain nameless because true courage seeks no public praise confirm that Leach lured Reggie to his death with false promises of ample opportunities for playing time and delicious molasses. Reggie, remembered by other bears as an animal of pure and generous spirit, trusted Leach as so many others have. Some say Leach was overheard in a local restaurant claiming that the only thing he "loves more than mistreating young men and bears is getting away with it because you're all stupid and evil always wins."

Services for Reggie are scheduled for noon this Saturday at the First Church of Christ, Panda. In lieu of flowers, the bears request that donations in Reggie's name be made to Elect Craig James For Senate Congress State Comptroller Class President Condo Welcoming Committee Sergeant-at-Arms.

P.S. This all happened because we said it did.