UPDATE: FOR MONEY, GEORGE CLOONEY WILL OR WILL NOT MAKE LOVE TO YOU

Share All sharing options for: UPDATE: FOR MONEY, GEORGE CLOONEY WILL OR WILL NOT MAKE LOVE TO YOU

This morning's update brings the usual news: Michigan, the title holders, have crashed the boards, rebounded, and surged ahead to a triumphant and decisive lead in the 2012 EDSBS Charity Boogaloo. Their $3,000 and counting puts them an easy two grand up on the rest of the competition, and unlike a Lloyd Carr offense the tally shows no sign of running out the clock. Well done, Men and Women of the Mitten.

The total is impressive thus far--over $9000 through Wednesday AM--but if the rest of you need some motivation, and we've got it. You may know that the refugee cause is one of some serious celebrity, and they remain committed to spreading the word and helping. How committed, you ask?

So committed that with a donation to the EDSBS Charity Boogaloo you can make right here, they will come to your house, undress you, and make love to you. 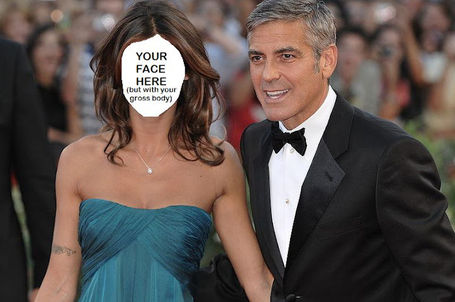 But any of the following celebrities, dedicated to the cause and willing to help, could show up to your home at any time:

We're not saying you get to choose. We're not even saying they won't just come to your house and eat nutella out of the jar with their finger without asking you. But we guarantee* that a donation to RRISA and the refugees they assist every day in Clarkston, Georgia will come with some kind of unsatisfying, possibly terrifying encounter with a celebrity. Or not. GIVE ANYWAY YOU WON'T KNOW UNTIL YOU TRY.