GRANDMA MADE MONEY ON MICHIGAN STATE. If that was true, and Lorraine Martens--seen in the video below at the 1:40 mark or so, slightly cranked on white wine and wearing a Sparty green sweater vest-- really did make money betting on Michigan State games, we assume she had to do it betting against the Spartans, since betting on Sparty straight up in a 6-5 year does not a Pinot Grigio-swilling hundredaire make. (Which she clearly is.)

1986 was a banner year for mustaches and sunglasses, too, but you already knew that. (Via.) (And bonus image.)

VRABROOOOOOOOO. Of Ohio State's SHOCKING list of NCAA violations reported by the school yesterday evening, the leastmost shocking of them is Mike Vrabel being cited for chewing tobacco on the sidelines. A Michigan man may laugh heartily at this, as he has long since disdained the filthy personal smog of the filtered dick, but did prefer it in the time of Benny Oosterbaan to the vulgarity of directly applied tobacco what is chewed. Messrs Switzer and Bryant stand in agreement.

WE'RE CERTAIN THIS WILL BE RECEIVED RATIONALLY AND CALMLY BY THE ALABAMA FANBASE. Slate leads an article on the non-binding nature of a four year scholarship, and certainly they wouldn't-- 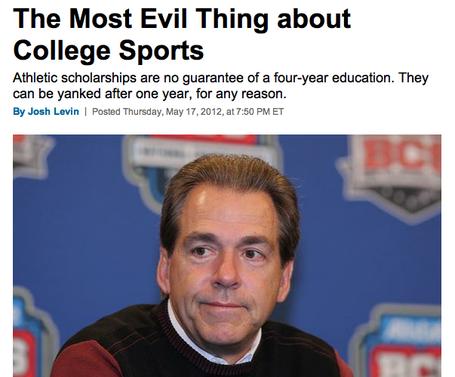 Josh Levin, you're gonna need friends. Friends who know what you're going to be facing. Until you meet those friends, we suggest staying inside and away from all open windows. Charge your cellphone, and keep your doors locked at all times. If you do have to fight, aim for the balls and eyes, or just say the words "Mike Shula" until the pain becomes too much too bear.

THIS IS SABAN BEING LEGITIMATELY EVIL. Mostly because in explaining the Rip/Liz concept, you get a clear sense of exactly how concise his explanations of his defense are and of how terrifying film sessions with him have to be. (More terrifying than a grand jury being devoted to the Alabama Teabagger case? Um...no. But close.)

ETC: But does one leave a tip, even with a coupon? "It looks like all the nerds in the world had a convention on your body." Mmm, contains fine notes of fraud and prunes.