MIKE SLIVE HAS CANDY. What gets teams in the van? TV money, a bucket of Laffy Taffy, perhaps a well-timed and politely offered glass of merlot (Pinkel category only,) and people's natural urge to dive into mysterious vans. 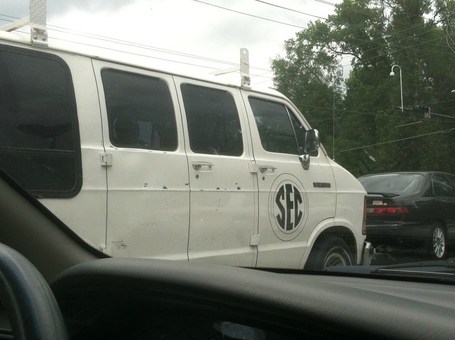 Please note that the SEC van, while still sketchy, at least has windows. The Big Ten version has none, and the ACC version doesn't even have a windshield, but is doing just fine, thank you very much. JUST FINE WE SAY. (Creepy Golden Flake Touching Van via.)

REGARDING OUR NEW FRIENDS. Will Muschamp's programming, though converted largely to FoleyBot.exe at this point, still does contain certain traces of code from his tenure at Texas under Mack Brown.

"It will be a very SEC-like atmosphere," Muschamp said. "It's one of the few places in the Big 12 that I would say that about.

"You ever been to College Station?" Muschamp asked. "It'll be the only time you go."

Muschamp then made a very confused chomping motion with a Texas "Hook 'em" gesture built into the hands, and yeah, maybe coaches do move around too much these days.

We would also anticipate some confusion for Muschamp when his cornerbacks are called for pass interference twenty times in the game against TAMU in CS this year, but that's not home cooking in the works. It'll just be former Big 12 officials being worked into the SEC scheduling rotation. Can we request the crew that worked the 9-6 2010 TAMU/Nebraska game? Marc Curles could really use someone to share the spotlight with, and that crew would be perfect.

TEXAS REMAINS FINE WITHOUT MUSCHAMP. For a lot of reasons, but mostly because they're wealthy hahahahha oh my god like Mack Brown owns two penthouses wealthy. (Seriously, he does, right there in the tallest apartment building in Austin. "Like the view, boys? This building's almost as big as my dick.")

BOOOOM. Chris Brown is in the process of uploading a bunch of VHS gold he has, and the first bit is the video we had on tape and wore out, "Quarterbacking The Spurrier Way." Please note the important elements of artillery sound effects, MIDI sex achievement music, and Spurrier wearing a sweater on what appears to be an 80 degree day in Gainesville. Chris also has a book that will make you football smarter, and you should buy it.

THE SCOREBOARD HAS SOME THINGS IT WOULD LIKE TO SAY, COACH FREEZE. Hugh Freeze is being very pragmatic about what 2012 will be for Ole Miss.

"The reasonable expectation for us in Year 1 is for us to compete passionately for this university for 60 minutes," Freeze said. "And whatever that scoreboard says at the end of that 60 minutes we’ll have to live with."

Scoreboard: "NO." "SORRY." "HAVE YOU CONSIDERED LACROSSE, THE ORIGINAL SPORT OF THE AMERICAS?" "LOL" "HAIL STATE."

ALL SALUTE THE INDIANA EXCISE POLICE. We don't know if it was them, but if it was then we're not even awarding a point for this Notre Dame underage drinking offense.