A SCENE FROM CITIZEN DELANY

Share All sharing options for: A SCENE FROM CITIZEN DELANY

A huge mansion. The wind rattles huge windows. A fire burns in an inhumanly large fireplace. A man lies on a bed. His bald head rests on pillows made from sewn-together domestic beer cartons.

He receives a text suggesting a sensible playoff scenario. A frown crosses his face. He texts back "NO" without elaboration. The man is tired. In his hand, a snowglobe glows in the firelight. 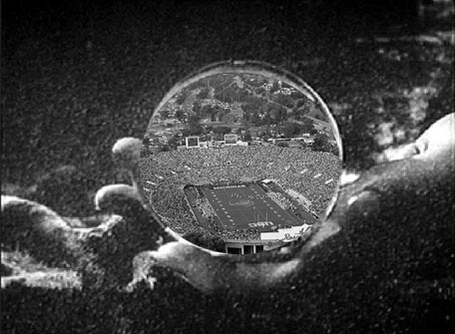 He then drops the snowglobe. It rolls down one carpeted step, then another. It hits the floor, and it explodes, leaking ROTEL Cheese Dip all over the floor.

--Excerpt from the classic Citizen Delany: A Story That Is Just As Good An Explanation Of Whatever The Hell The Big Ten Is Doing To Shoehorn The Bowl System Into A Playoff At All Costs As Any You'd Care To Come Up With. The film was particularly controversial, most especially for the scene of an elephant trampling a real wolverine to death for sixty minutes that followed the legendary snowglobe sequence. Are we saying Jim Delany had a sled called The Rose Bowl he used to ride around as a child in the only happy moments of his life? No: Jim Delany has never been happy.