LAWYER MIKE IS THE MOST FLORIDA PERSON EVER

Share All sharing options for: LAWYER MIKE IS THE MOST FLORIDA PERSON EVER

Lawyer Mike is possibly the most University of Florida fan person ever, and we say that as someone who just imagined the word "Wuerffelita" as a name for a child. (Only briefly, but even inventing something that heinous is a crime in itself.

We don't want to just give you the simple mock, though. No, internet, we want this to be a relationship, one where we take you by the hand and show you just how deep this runs, and how Lawyer Mike, attorney AND aspiring internet r 'n b star, is beyond your mockery. You may have already realized this just by looking at Lawyer Mike's tonsure-mullet. In case you did not, we illustrate this and the key elements of his Gator-osity below.

1. HAIR. It's not a mullet, it's the mullet evolved. That mullet is growing feathers, and has a prehensile thumb. It saw the monolith and picked up a bone and beat a faux-hawk to death and advanced civilization a step further down the line. This mullet has built the rocket and has won the game by sending colonists to Alpha Centuri. The beard..the beard is so high up the face it's less a chinstrap beard, and more of an equatorial cheekstrap.

2. SINGING AND MOURNFULLY MUGGING FROM VARIOUS FORMS OF TRANSPORT 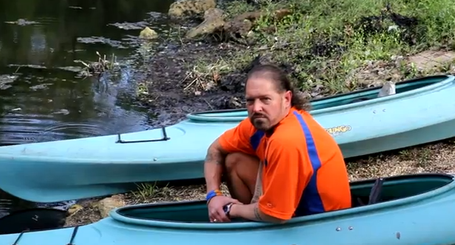 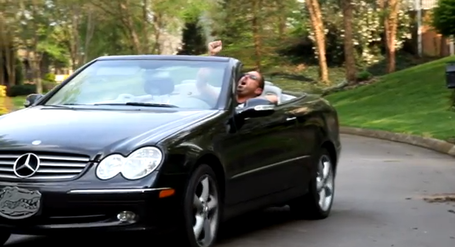 3. ACCESSORIES. The two Florida colored "LIVESTRONG"-esque motivational wristbands ensure he's not just motivated, he's got enough inspirational fumes run through a brick wall like the Kool-Aid man. Hopefully the wall belongs to a court house, because he's due in one to represent a client in 10 minutes. (No, seriously. He's a lawyer with clients and everything. This makes his basic essential Floridian-ness infinitely deeper.)

He also owns the Gators' surgeon's cap, which no one has ever bought ever. 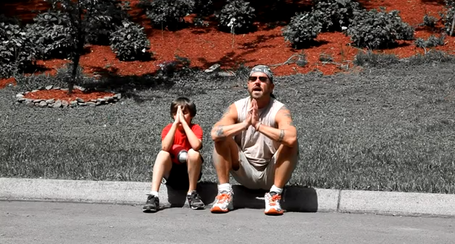 In church, after scoring a touchdown, or with your son on the curb scaring the shit out of everyone else in the neighborhood on a random Tuesday afternoon. Anywhere, really.

5. FASHION. Cargo shorts (the new jort, if you will,) sleeveless tees, and only the most garish gator gear designed to make you resemble some kind of loudly-appointed sanitation worker from the future. Formal wear are silk-poly blend shirts, pleated pants, nothing tucked or fastened, and some kind of expensive sandal. 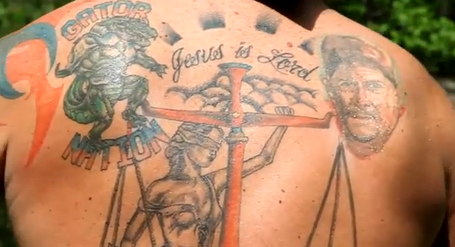 Dead relative, heroically outsized Gator tat, and the scales of justice. What you can't see? The "L" and the "M" in the scales for "Lawyer Mike." There is also a flaming basketball with hoop on his arm, because we have no doubt Lawyer Mike IS the dude who demands to play the point and jack like a thousand threes a game in pickup.

7. BEING A RAGING SUCCESS DESPITE THE STANDARDS OF TRADITION OR TASTE. Oh, you say you don't want an attorney with a side gig as a kind of one-man Color Me Badd? That would be like saying you don't want a successful football program that essentially didn't exist prior to 1990 clad in eye-destroying orange and blue, man. In other words: blasphemy. We'll pray for you, and if you don't believe it, check the back tat for proof, brah.