Share All sharing options for: NFL BLITZ HAD A VERY SUGGESTIVE PLAYBOOK 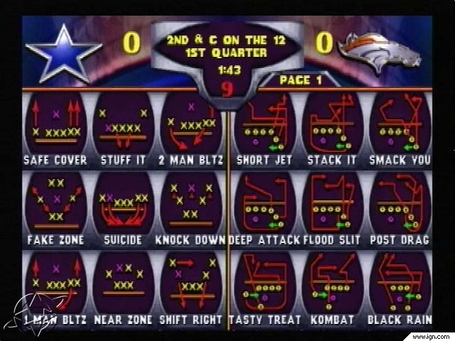 1. NFL Blitz was the video game too fast for ADD. If we remember the arcade version correctly, there were a few variations between the rules of normal football and Blitz. Blitz was played with seven players on each side at the start of the snap. Then, eleven men blitzed from the bench on every play. John Brantley would later report it was the most realistic football game he'd ever seen.

2. Trent Dilfer could run for a 30 yard first down in Blitz, so, um, maybe realism isn't the word we're looking for here at all.

3. If you had to guess who knew what they were drawing up here, you'd have to say the defensive coordinator simply based on the nomenclature. Near Zone is Near Zone, Shift Right is Shift Right. This man's toolbox contains wrenches where it says it has wrenches, and not a bolt is out of place. If his car has a spoiler on it, then that car goes 185 mph and requires such stabilizing structures.

4. Then there's the offensive coordinator's playsheet. While there are some recognizable concepts somewhere in there, most of these routes involve not double, but triple moves at the very least, and contributed to Blitz's mania for quarterbacks being blasted 20 yards through the air with tiny popcorn kernels of brain matter flying from their ears. Whatever you do, Steve, make sure the routes take minutes to develop. We want this to look JUST like a Mike Martz offense run in a corn maze! That's what the people want!

5. Roger Goodell's legal staff, in retrospect, has to be very happy they eventually endorsed this product, and its playbook for the N64 edition including "CTE BRAINBLEED NUTSLAP" in the defensive playbook.

6. If the plays designed to put receiver into one tiny, bathtub-sized space did not convince you this is sheer insanity, the names should clue you in that the person making this has no clue what they're doing. This is a football playbook if written by a foreign man whose only English vocabulary has come from watching hours of free Brazzers.com clips.

None of these plays ever worked, and you just scrambled until something good happened.