THEY FORGOT THE PAWWWWWL PART 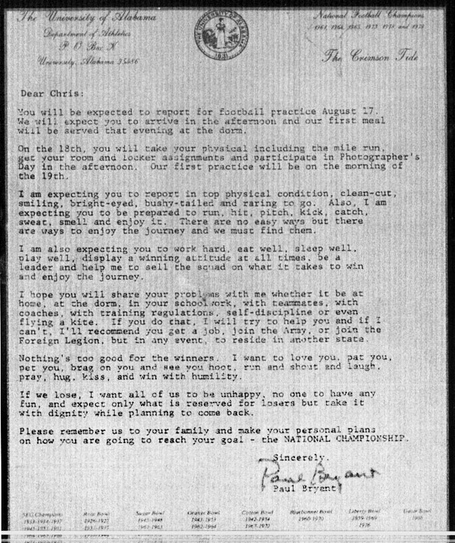 Yawn. Call me when page 2 where the map to the buried pirate treasure and the political figures the player must kill in order for his scholarship to be renewed surfaces.

NOW THE BOTH OF US ARE COLORBLIND/CAUSE THE OTHER SIDE LOOKS GREENER/WHICH LEAVES YOUR TURF IN A BOISE STATE The Broncos are evidently having massive cold feet about their imminent move to the Big East. Per CBS Sports' Brett McMurphy, Boise continues to meet with Mountain West officials and ,as reported earlier in this week, solicited the Big East to help find a landing place for its non-football sports. A few suggestions where Boise State could turn should be they need a rebound conference to get their groove back:

FREEDOM OF INFORMATION ACT SIGNAL So maybe not as he's just a kid, but Arkansas Razorbacks head coach John L. Smith (felt so good to type that, you guys) gave wide receiver Quinta Funderburk a scholarship release. Rumor has it Funderburk plans to enroll at Syracuse, though there remains some whispers he could wind up closer to his Roanoke home and land at UVa (where he had at one time committed anyway). A source told EDSBS Funderburk's planned means to leave town is as follows:

WHO? The true tragedy of the arrest of West Virginia's Darwin Cook and Terrence Garvin is that now Dana Holgorsen has to pretend he knows who they are. The pair of WVU defenders were arrested Tuesday for stealing Gatorade and snacks from a place called Sheetz in Morgantown. /cue Clay Davis video. An unreleased statement drafted on a bar napkin from Coach Holgorsen read "if a man's thirsty, he should drink. Is your husband still on nights? Y/N?"
NEW ORLEANS'D Tulane head coach Curtis Johnson (yes, he's Tulane's head coach; former New Orleans Saints Bounty Quicker Picker Upper Righteous Indignation wide receivers coach) suspended defensive end Lawrence Burl indefinitely after a May 3rd pot arrest. The deets:

Sources tell me the amount of marijuana found on #Tulane footballplayer Lawrence Burl was not "small time".

Pimpin ain't easy, but slinging in the big one is. Or was. Look, just because you're playing in the CUSA doesn't mean you can't try to go all-SEC with the quantity of pot on hand. Reallocate the greenery as far as your mind's eye can see. That's what I always say.

'UH, AHEM, YEAH, WE'LL GET TO THAT WHEN WE GET TO THAT' Dabo Swinney is taking his sweet time deliberating on punishment for Clemson stud sophomore Sammy Watkins. In fact, if he just sort of, kind of forgets to punish him up and through the Auburn game, you'd completely understand. Honestly, it might be more of a crime to keep him from cutting laterally and turning on the jets against the Tigers than it would for him to sit out. Look, everyone outside of Auburn understand this. In many legal situations, this is enough for a full pardon. It's just the law. I don't make the rules, I just try to live by them.