Dear cousin WAC: we hardly knew you by the end. Parts nibbled away, you barely resembled your former self, a mere scrap clinging to newer parts that had replaced new parts agglomerated around older, yet unoriginal parts. By the end, when New Mexico State and Idaho were left, neither were original nor particularly thrilled about being the last two in the band. The reunion edition of 2026's N'Sync will recognize you bitterly in a photo, and sympathize about the weird fate you share: the standard-bearers for a nonexistent and forgotten standard.

Like any eulogy, let's remember your fate, but respect the life as well. You were, above all else, interesting. Not everyone is born with the advantages of an SEC, Big Ten, or Big 12. Hell, you didn't even have the fine, hand-me-down breeches the Big East stole from other conferences happy to turn a blind eye toward the conference rummaging around its closets.

It wasn't just the Big East in your pocket. Conferences that did not even exist when you emerged from the sands of Arizona took their bites, and then whole hunks, and finally rendered you limbless. The Pac-10 stole away with the pillars, Arizona and Arizona State. The Mountain West did the most damage, taking the remaining originals--including your only football national champion, BYU--and forming its own fiefdom high in the Rockies.

When the jackals returned, they knew where to look first. The gimpiest of wildebeests, you could not hide. The Big East, Conference-USA, and Big 12 took their turns, but when the Sun Belt stood on its wee hind legs and took its toll, you became the lawyer eaten by chicken-dinosaurs in Jurassic Park. All hope was lost, and the only hope was that shock would dull the pain of the final, dolorous indignity of the collapse from a sixteen team monster to a two team cripple waiting out the end.

You made the best of what you had while you had it, though. We'll remember you for the good things. The fine things. The things "televised really late at night when no one but us, Matt Hinton, and five bookies in Vegas" were watching. 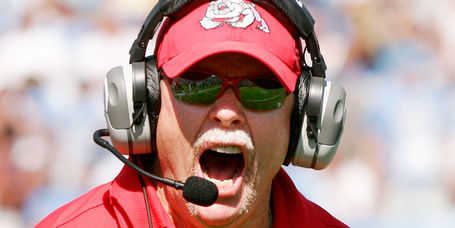 We'll remember Pat Hill's Fu-Manchu, going gray over the course of a decade spent on the precipice of almost pushing Fresno into a downhill slide of greatness. (Almost.) We'll remember Hal Mumme's brief and very fun lark at New Mexico State, especially his taking all three time outs before a field goal attempt at the end of a half against an enraged Pat Hill in a Fresno State blowout of the Aggies. Mumme laughed, and so did we. Bad, sad football has its own tragicomic weight.

Kibbie Dome, we'll remember you for being so sheddy, and so reminiscent of what we thought a stadium in Idaho should be: without windows, dark, and built three degrees south of the Arctic Circle out of the remnants of a Cold War listening station. That Robb Akey has to yell at God to give him one, just one running back with 4.5 speed beneath a thin metal roof is one of the conference's tearful comedies. San Jose State, we'll remember you for the soggy motions of Colt Brennan's final game before being smashed to tiny screaming atoms against the Georgia Bulldogs. He looked so very wet beneath your spotlights, and so very alive.

Hawai'i, we'll remember you for the garbage storms, and for long games made longer by the sixtieth pass thrown at two-thirty in the morning on the east coast.

We will remember the broadcasters who traversed your rickety, sometimes frozen, sometimes sweltering pressboxes. Joe Tessitore and Rod Gilmore, you were the hammiest, but that was not unusual: without enough talent to spread evenly across both squads, the WAC leaned heavily towards offense and away from contesting long runs, longer passes, and free-range trampling of the scoring lines. The games' point totals and times could sometimes converge in a happy moment of randomness: at 1:04 est, you could finish watching the 54-50 Boise/Nevada game you began at 10:00 p.m. EST.

We will remember the games. The last hurrah of Colin Kaepernick, running the option out of a funkily spaced formation against, through, over, and around Cal in a 52-31 rout in 2010, is a fresh memory. So is Utah State grabbing Ted Roof's hand and signing his effective transfer to Penn State in the Aggies' near upset of Auburn to open the 2011 season. For one instant, with emptying stands and flailing defenses, Utah State brought the WAC to the SEC, and for everyone but Auburn fans, it was a glorious, humid mirror of the zany Left Coast conference. (Kind of like the WAC, but given the humidity, a version played underwater in a strobe-lit aquarium.)

But most of all, we want you to remember this.

Every conference exists, but not all truly live--to play a short-lived conference championship game in Las Vegas, or win the freakiest of national titles with a pass-first Mormon team, or even to pull off the only bowl game upset most journalists will admit cheering in the box during.

That's you. When it came time to win, a WAC team did not grimly line up in the power I, or do anything a mundane and supremely talented team would do. No, the team from the WAC ran a statue of liberty play off a quirky goal-line bubble screen which had been thrown by the receiver for a TD on the prior play. You put your pants on the flagpole, WAC, slapped an octopus on your head for a hat, and boldly strode into the final battle with a stale baguette for a sword and cunning as your armor.

It's what we'll bury you in. Well, what's left of you, anyway.