Boardmaster Brian sheathed his driver, aka his penis, aka "Golf's Reggie Nelson." He'd done it. He'd won the Masters under his pseudonym "Bubba Watson," and thus fulfilled all his dreams. He grabbed the green jacket, and then ran to the parking lot and drove home quickly. Why? Because he needed to give you the Fulmer Cupdate you so craved, and do so before noon on Monday. His name be praised, and updates and clarifications follow the board.

Ps. Boardmaster Brian got screwed in this competition. 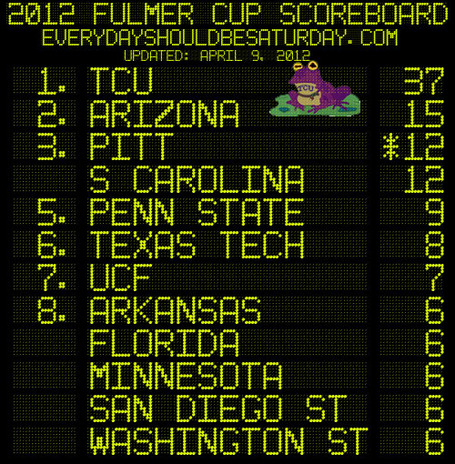 KANSAS. Charlie Weis' leading rusher, James Sims, was arrested for DUI early Sunday morning in Lawrence. Without spectacular details, we have to award a basic two pointer to the Jayhawks, who say they will handle the case internally. That handling will likely take place at the hands of S 'n C coach Scott Holsopple.

That's Charlie Weis, punishing you by punishing the strength and conditioning coach for your stupidity. HOW DOES THIS MAN EVER RUB ANYONE THE WRONG WAY EVER? It will only take three years and around $12 million, Kansas fans, because that is Charles' standard fee for these things.

PENN STATE. The Nittany Lions may have set a record for economy here, as refusing to pay for a grape beverage and a sub, valued together at $7.88, earned four points for three misdemeanor charges for former PSU defensive end Shawn Oakman. Though he was kicked off the team three days later, the points stand as he was on the team at the time of arrest. The disorderly conduct, retail theft, and harassment charges are each a point, and a bonus point for such production off of so little earns a bonus point for a total of four points for Penn State.

DUKE. A thinly reported assault story will be three points for the assault, one for the hitting girls bonus point, and one for doing something to put Duke football in the news, period. Five points for the Blue Devils, who did kick the alleged offender, Tyree Watkins, off the team immediately after his arrest.

ARKANSAS. Nothing until someone files some kind of charges against someone, though it should be known that the Damon Evans Precedent would kick in if Petrino were ever charged with anything and his points would count. (Which, in all likelihood, he will not be.) Until then, stop being silly, and no points awarded for no charges.