OH BOY OH BOY OH BOY. We post this at the risk fo encouraging more Terry Bowden-related marketing, like a Terry Bowden-shaped dirigible hovering over the stadium at all times. Correction: this would be fantastic, and we want it to happen whatever the coast, Akron. Spend hundreds, nay, MULTIPLE HUNDREDS to make it happen.

The Blimpden can wait. The dadgum Bowden shirt, however, is very real and available now. 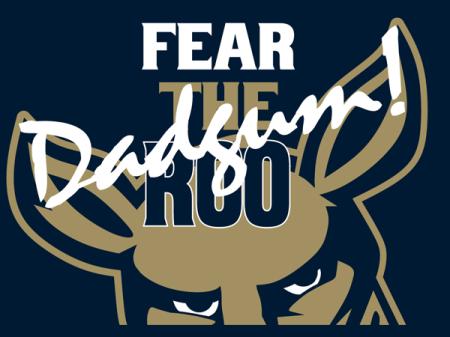 Other t-shirts of recent topical interest are also available other places. Does Bobby Petrino have road rash on his penis? Can this be covered with a FOIA? These are questions Clay Travis is already asking, because he is a lawyer. (Luv u, C'lay.)

THINGS NON-PETRINO FOLLOW. WE KID. It's all Petrino today. Here's Jeff Long's very uncomfortable press conference if you missed it. He's suspended with pay pending an investigation, and admitted both to lying and "a previous inappropriate relationship."

THE LETTERMAN OPTION. Arkansas Expats thinks that might have been the smarter option.

HE'S SOMETHING. That's Andy Staples on the matter, whose quick reaction says Petrino at the very least put his boss, Jeff Long, in a horrendous position, and that Long's future is tied to Petrino's, and that makes this all very awkward no matter what happens.

HE'S DONE. This is the verdict of Dennis Dodd at CBS, and for a rare moment let us agree with him because of this single point: he lied to his boss. It may not be now, or even this year, but the end starts now unless they fire Jeff Long and give Petrino the real power in the athletic department. This being the SEC and especially because this is Arkansas--a brutal and unpredictable political environment at best--this is entirely possible.

HE'S MESSY NO MATTER WHAT HAPPENS. Feldman highlights the blindside factor to this, which you can think of at Petrino throwing a good ol' fashioned radio block for his AD.

BALLADEERING: Chris Vernon has already composed his ballad on the affair.