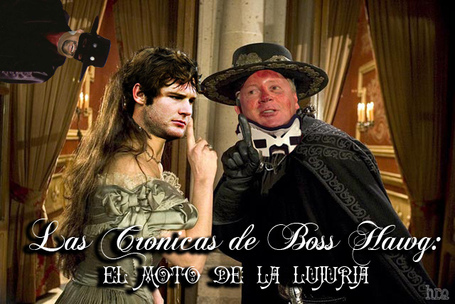 Good telenovelas never die: they simply put the entire cast on a plane in the final episode, kill everyone, and then reboot using the same sets. Ooh, look, it's Cousin Tio, who we never heard of last season, but who has sole inheritance rights to the hacienda! Will he resist the advances of Senora Bildungsromana, the older woman* who has her eyes on the hacienda's lucrative mineral rights? Or will he fall to the charms of Sister Madrilena, the kindhearted nun torn between her duty to the ninos of the village and her budding affection for Cousin Tio?

The original and wildly popular LAS CRONICAS DE BOSS HAWG killed its entire cast in 2009 in a fiery finale involving a blimp accident. The inevitable reboot has appeared, both from viewer demand and because this is Arkansas football, the closest thing our fair sport has to a proper Mexican daytime drama. Andale! 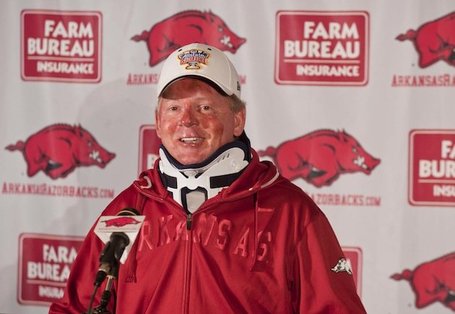 Introduced as having shadowy origins. Arrived in middle of night. Alludes to dark past, but never elaborates. Rules HACIENDA JAMON with an iron fist and few words. Arrived with SENORA BOSS HAWG and his brood, but has passions for local apple-snatching champion and volibol player LA RUBIA. Is archenemies with fellow local titans ENANO ROJA and TIGRE LOCO.

PLOT: Will spend season attempting to reconcile relationship with JEFE LONG after betraying him in a one-horse accident with LA RUBIA. Is wearing a neck brace, but is the real injury in his corazon? (Pending proof of corazon. SPOILER: does not exist.)

El brother de El Petron. Is the HACIENDA JAMON foreman with a silent passion for a local woman he can never have. That woman is an anvil named ELISABETA. Their love is a frustrated one.

The villagers were angry when Elisabeta was named chief of policia. "Jefe!" they cried, "how will this flaxen-haired anvil protect us from los banditos de Saban?" "Puntos, y mas puntos!" he cried as the town was burned.

Former apple-snatching champion of HACIENDA JAMON, LA RUBIA succumbs to the charms of EL PETRON when the two raise money for a children's hospital/stadium. It's mostly a stadium with a small first aid stand, but do not let the details bother you. Their passion is a secret until EL PETRON's eight legged stallion, FRANCISCO BROYLES, falls and injures EL PETRON. Lies and accusations ensue. Is an archenemy of SENORA BOSS HAWG. Is engaged to nameless bro who will disappear quietly sometime in the first episode.

Mysterious figure that she is, she will speak in this edition solely through her attorney, who will nail messages reading only "UN MEDIO, CABRON" on the door. She and EL PETRON are not speaking.

The magistrate of the district, and one of the only men in the world who can reign in the reckless behavior of EL PETRON. An initial friendship with EL PETRON blossomed after their encounters at war together convinced JEFE LONG of EL PETRON's brilliance. From the flashback scene:

The crash and subsequent deceptions have soured their relationship, and now EL PETRON's fate hangs in the balance as we start our saga. Eschewing the aristocratic horse for transport, JEFE LONG travels as the people of EL ARKANSAS do: by the noble and occasionally cranky black bear-cart. 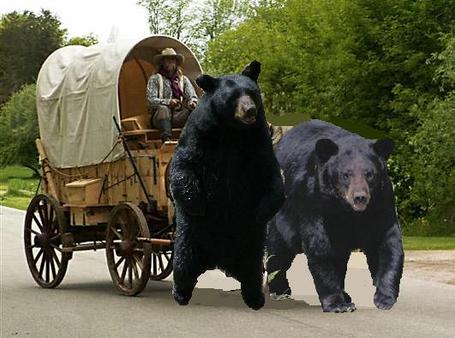 The ancient eight-legged stallion of the hacienda. He will spend the entire season napping in the ditch where EL PETRON crashed him. Despite this, he is fairly content with things in general.

The faceless rebels undecided on EL PETRON's fate, and a crucial plot point since they sort through your garbage whether they love you or hate you.

The former HACIENDA JAMON heir whose long exile ended with a title to the small hacienda in the adjacent HACIENDA TREESTANDIO. Once thrown from his birthright by force, is he the once and future king, or is he content to rule his tiny village as a gigantic tortoise among baby turtles? Is married to LOCA CHURCH LADY, who's actually a stock character you can find almost anywhere.

The weather for the HACIENDA JAMON? A forecast for passion, of course. There will also be blood rain at three p.m. and on-air talk radio suicides, but that's kind of a given for Arkansas football.

LAS CRONICAS DE BOSS HAWG DOS: WHEN LOVE MAKES A SQUEAL, IS IT THE SOUND OF A MOTORCYCLE CRASHING OR THE MAKING OF SWEET LUST-BACON?